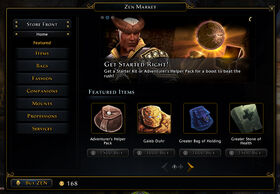 A view of the Zen Market store front during open beta

The Zen Market is the in-game store where items are offered for Zen, a currency which can be purchased with real-world money or with Astral Diamonds on the Astral Diamond Exchange. It is always accessible to a player for long as they are logged in on a character through the fifth button from the left at the bar typically at the top center of the heads-up display or, by default, pressing the "Y" key.

Items purchased on the Zen Market are transferred immediately to the inventory of the logged-in character, except of course when the purchase is of an account perk like an additional character slot for which there is no associated item.

Around once a quarter, PWE will offer a Zen sale that averages about 15% bonus Zen. There are limitations to the type of transaction.

PWE will use Twitter, Facebook and their News page to announce when the next Zen Sale is.

Zen Market Coupons are available in-game from a few sources. The coupons usually disappear after an hour, except certain coupons such as 20% Off Watler, available from the Day of the Dungeon Master event, and the 50% Off a Blood Ruby Pack from the Neverwinter Epic Hero Pack, awarded for reaching level 70. These coupons disappear after 24 hours. Note that coupons do not combine with items that are on sale.