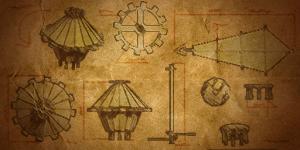 Wonders of Gond
Gond, the Lord of All Smiths, has identified Neverwinter as requiring some encouragement and observation.

Clerics of Gond have come to the city to offer rewards for artisans and engineers, allowing Neverwinter's Heroes to craft valuable and innovative items.

To participate
You must be level 10 or higher and kill monsters that are within 7 levels of you. When they die, collect the special loot which they may drop. Refine these items to create special rewards or to trade in the event's store.

Rewards
There are many rewards for helping spread Gond's Wonder:

Refine [Wondrous Grommet] into a mighty [Doohickey] which you may use against your foes, or tithe for a chance at the rare [Apparatus of Gond].

You can also purchase numerous items for refined [Wondrous Grommet], such as:

During the event, all tier 1 through tier 6 challenges within Sword Coast Adventures have a chance to give out [Wondrous Grommet]s.

During the event, some professions have a special level 30 task to create [Wondrous Sprocket]. Each task has a base duration of 2 hours. From module 15 all became the same task regardless of profession.

During the event, [Blueprint]s can be purchased for 110

in the Zen Market.