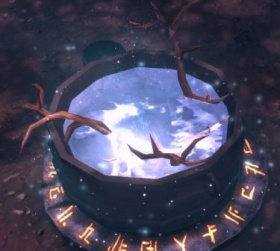 Finderal Birchspear sends you to lure and kill a pair of fomorian witches.

Tamper with Witch Cauldrons to confront and kill Fomorian Witches on the Upper Bank of the Dark Fey Enclave in Sharandar.

Finderal Birchspear
Malabog's fomorian witches are responsible for the fouling of our river, as they brew their noxious potions. This has to stop.

If you tamper with a witch's cauldron, the witch is sure to appear. When she does, you can put an end to her foul alchemy. Once the riverbank is free of witches, it can begin to heal.

Approaching a Witch Cauldron will give the option to tamper with it, which will summon a fomorian witch and some of her minions for you to attack.

Finderal Birchspear
Well fought. The death which you meted out to the witches was richly deserved.
Retrieved from "https://neverwinter.gamepedia.com/index.php?title=Witch_Hunt&oldid=396520"
Categories: