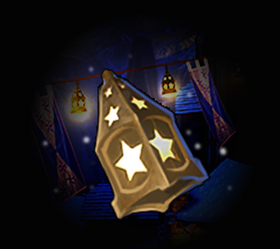 The Winter Festival is an annual calendar event.

Visit the village of Twilight Tor and witness the wondrous celestial event, the Lights of Simril. Get into the festival spirit by trading fallen [Light of Simril] with other stargazers. Try your hand at ice fishing or join a race in a fabulous [Winter Sled]! And much, much more!

Come by every day for special activities and unique rewards available only once a year, including Woolen Scarves, Winter weapons, a [Dappled Riding Horse] and new companions: the [Fawn of Shiallia] and the [Frost Mimic]!

The stars are aligned, and the Lights of Simril are in full glow. Get bonus [Light of Simril] for festival activities and earn new rewards, including unique Woolen Scarves, and additional rewards for professions tasks.

Come by the Winter Festival, found on the overhead map, every day for special activities and unique rewards available only once a year!

Occasionally, an Unlucky Angler skeleton will pop up and attack.

For the third run of the event, the monsters were replaced with Demons:

Slide down the course. The glowing chevrons grant a 5-second speed buff that stacks up to 4 times, after which hitting a chevron refreshes the buff's duration. The twenty-five slalom gates are worth 10 points each. The four rally gates are 100 points each. A fast mount helps reach the rally gates within the 30 second limit. Bonuses appear as bags randomly on the course. Gold Bonuses are 200 points, Silver Bonuses are 100 points.

There are four sources of lore from the Winter Festival: the Lore of Simril quest, an inscription in the Old Temple, random constellations from the Omens of the Stars quest and random fortunes from opening Mysterious Fortunes.

Omens of the Stars[edit | edit source]

During the festival, the following items are offered on the Zen Market: