From Neverwinter Wiki
Jump to: navigation, search
Hunting the Relics
The Tower District was once the center of commerce for Neverwinter. The merchants who lived here worshiped Waukeen, the goddess of wealth. Many merchants had private shrines to Waukeen with a golden cornucopia at the center to bless them with riches.

When the cataclysm struck Neverwinter, many of these relics were lost. They are an important part of the history of the city, and should be recovered. Help us reclaim these lost relics by participating in the Relic Hunt Event!

Waukeen is the goddess of wealth. She was worshiped by a large amount of Neverwinter's merchants that resided in Tower District, it's economical heart, before it was almost destroyed and conquered by the Many-Arrows Tribe orcs. Her symbol is a golden cornucopia: the merchants used to keep one of them in their treasures as a symbol of devotion and a request of protection. During the event Lost Relic the heroes are asked to find those scattered relics all around the tower district. They can be found in hidden places, such as corners or the inside of the destroyed buildings. 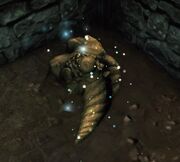 A waukeen lost symbol, the golden cornucopia
WAUKEEN WAY
Waukeen Way was once a place where successful merchants of the Tower District built their homes. Named after Waukeen, the Goddess of Wealth, this place once housed opulent mansions with well-tended gardens.

Now, Waukeen Way is a shadow of its former self. Devastated by the cataclysm, few buildings remain, and only a lone shrine to Waukeen survives amidst the ruins.

Named after the goddess of wealth that protected the merchants, Waukeen Way is south-west part of the Tower District and is the setting of it's first quests, Ending the Torture and Saving the Guards.