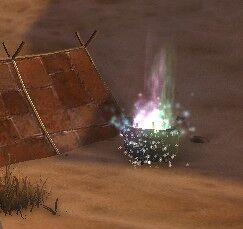 Volatile Compound is a repeatable quest for the Tyranny of Dragons Campaign in the Well of Dragons.

Sandesyl Morgia
Many of my former colleagues were rounded up and imprisoned when the new Cult of the Dragon rose to power. Now, I know that nothing I say will make you sympethize with us, so let's talk pragmatically.

One of my associates, Veymal Ingsteen, is of particular use to us. He willingly allowed himself to get captured and imprisioned in order to learn information from the inside, and now he needs rescue.

The Thayans brew a potion that may be able to get him out of his situation. You won't like the details, but what you do need to know, is that they have it at their camp, and you need to bring it to him. Oh, and it's fairly volatile. It won't last long after you remove it from the Thayans' supply, so get it to him quickly.

So, Sandesyl sent you? That must mean it's time for me to make my escape. That should be easy with the potion you brought. Now to wait for it to work...

Sandesyl Morgia
Not bad, my little morsel. When Vaymal returns, we should have the information we need to take the usurper cult down from the inside out.

Are you sure you don't want to consider joining the true Cult of the Dragon after this is all over? I have need of snacks, er... heroes like you.

Look, can you blame me for being hungry? These blasted fools won't let me feed in the camp.

You must deliver this potion within 3 minutes. If the time runs out, you will have to talk to Sandesyl before you can acquire a new potion.