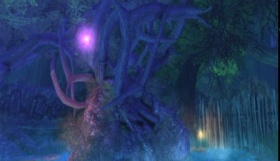 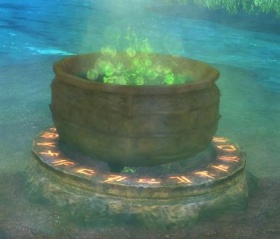 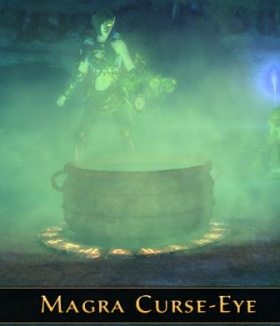 The Witch Fen is the location of the quest Trouble Brewing, where you are sent by Finderal Birchspear as part of the Sharandar Campaign.

Deep in the fetid swamps of the Dark Fey Enclave is the Witch Fen where Magra Curse-Eye and her sisters perform their foul magic in the name of Malabog.

Completing the quest in the Witch Fen gives you a chance of receiving one of the following rewards. You will require a Dark Fey Key to access these rewards.

Finderal Birchspear
The fomorian witch, Magra Curse-Eye, leads the coven that controls the Dark Fey enclave. From her fen lair, Magra works cruel hexes and plots our ruin. This must end.

Magra's witches guard their lair with alchemical magic which you must overcome before you can put an end to them. Fortunately, we have a spy in the Witch Fen. With luck, she will have learned how this may be accomplished.

Travel to the Witch Fen and meet with Triste.

Enter the Witch Fen and defeat Magra Curse-Eye in the Dark Fey Enclave in Sharandar.

There is a Repeatable (Daily) available after doing 3 more Dark Fey Enclave Repeatable Quests. Note however the quest is not required to run this dungeon. You can run it simply by going in the entrance as many times as you wish. You can also open the chest at the end as many times as you wish - given you have a Dark Fey Key. The quest is only necessary to gain the rewards listed on the right in the infobox.

Triste
Fomorian witches use a bizarre assortment of plant and animal parts to brew powerful alchemical magic. By these means, they've magically sealed the entrances to their lairs.

I've learned these seals can be dispelled by adding proper ingredients to the coven's communal cauldron. The lesser gates are simple. Just add this - Adder's Tongue - to the cauldron to bring them down.

The spell warding Magra's lair is more complex. You'll need three ingredients, each held by one of Magra's lieutenants, to get past it. Use the Adder's Tongue to reach the lesser witches and capture what you need.

Finderal Birchspear
An end to that witch's meddling can only serve to strengthen our case, don't you think?

And one of the Following:

Additional small chance of one of the following:

The names of the three lesser witches are interesting when researched: