From Neverwinter Wiki
< Trickster Rogue
Jump to: navigation, search
Some or all of this article's content may be out of date. You can help Neverwinter Wiki by updating it.

Click the above link to see an updated version of this build. Please note this build varies and for the most part is dependent on ones opinion. There is no specific way to create this build. This is merely an example of what it could look like.

Most guides for the TR are for PvP. Many people believe that the TR was created solely for PvP, but I believe that it can be a devastating force in PvE if played correctly. With the right encounters and buffs, not only can you be a successful support role, keeping the enemy slowed and stunned, but you can also do massive amounts of DPS

Note: Lashing Blade can be swaped for Blade Flurry in an AOE environment, but I prefer lashing blade because most of trash mobs are eliminated fairly quickly and LB is very nice for a single target.

Feat tree is straight Executioner. I did not put any points into Devastating Shroud or Twisted Grin. The reason for not putting into Twisted grin is due to fact it only procs once every 10 seconds and can only get +25% more damage at most. I would rather take a constant +25% below 40% HP and 30% HP. Sometimes there isn't enemies dying around you in boss fight for Twisted Grin to proc on, but you can allways count on the contant +50% damage below 30%. 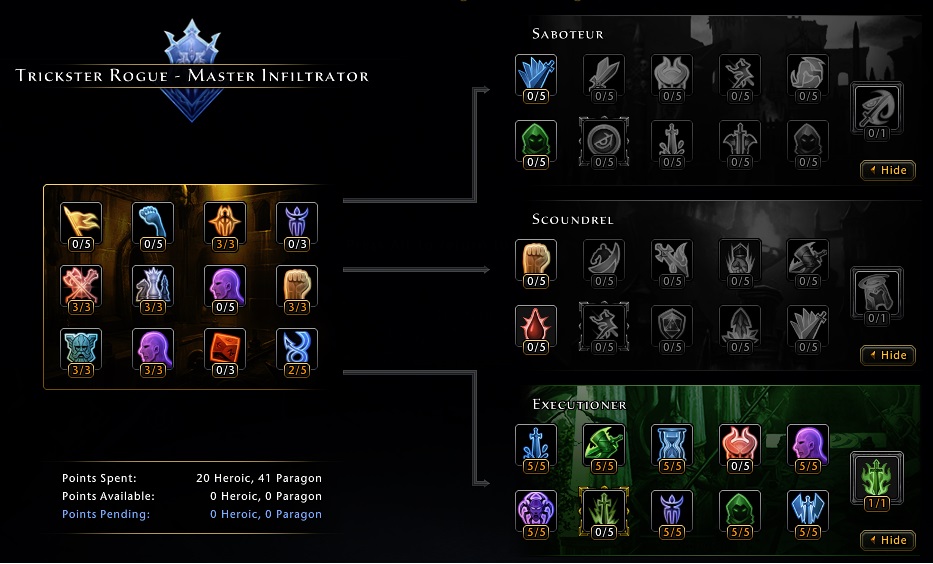 Campain Boons – I stand behind all my boon selections except fo the Tyranny of Dragons campain. I believe I should be 1 in Life steal, 1 in incoming healing and one in critical severity. I wouldn't recomend all points in severity. Eventually I'll get around to respec … eventually. 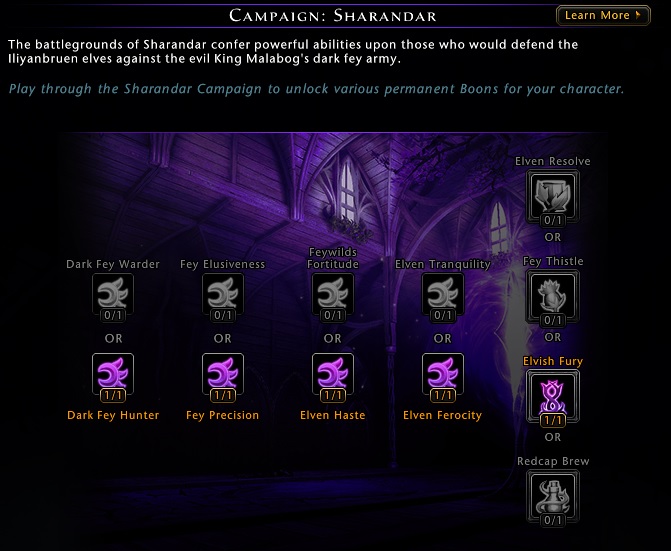 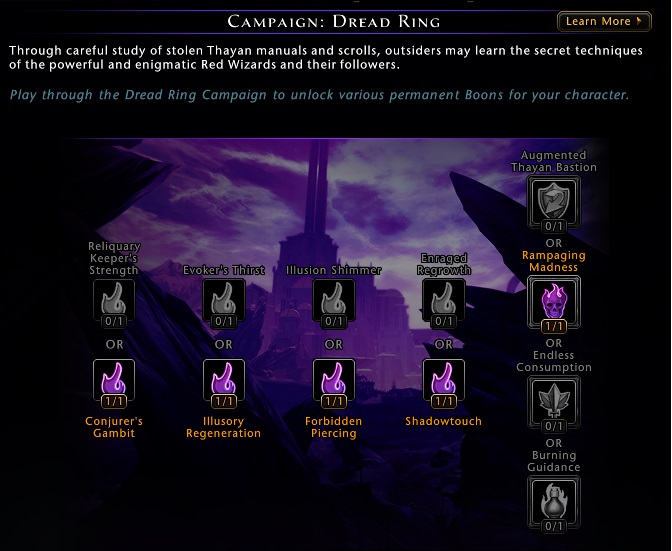 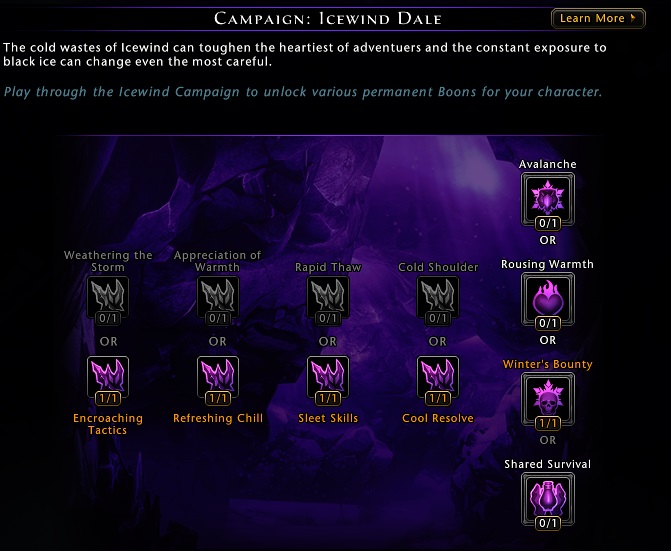 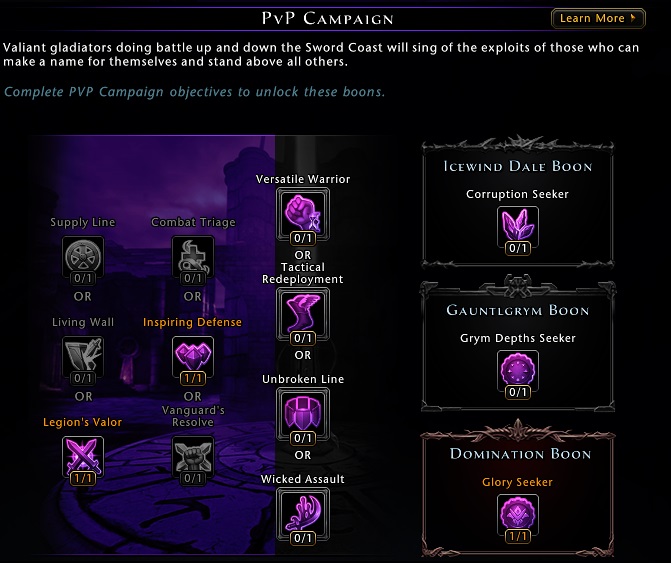 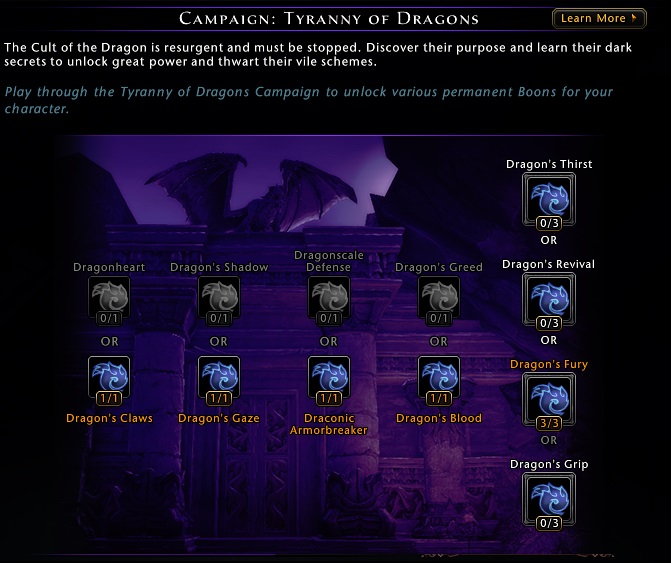 Note: We only need 1 legendary companion, that honor is for our Ioun Stone, more stats is always good. Legendary lvl doesn't increase our companion's active bonuses.

[Armored Orc Wolf] gives 300 to critical almost an extra percent. I will probably swap this out if there is ever another time to get the Epic [Cambion Magus]. As it gives 10% Critical Severity. 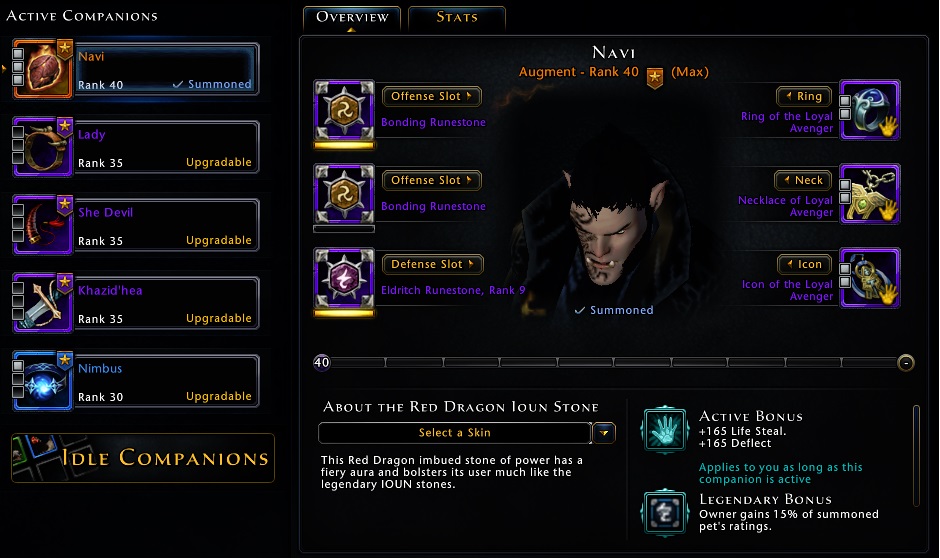 Necklace, Belt and Artifact: We will aim for the Lostmauth's artifact set bonus. *[Lostmauth's Hoard Necklace], Golden Belt of Puissance and *[Lostmauth's Horn of Blasting] respectively. The set bonus “do an additional hit for Weapon Damage on a critical hit”, it's simply perfect: +2 STR +2 DEX as stats just like our ability scores, additional hit on crits. Right now, the bonus is working better than it should, being fair I expect it to be nerfed a lot but even nerfed is going to be the best set for us so don't hesitate to get it (it might become cheaper in the AH once is nerfed, so it's up to you when you decide to get it.)

[Duelist's Flurry]. You will get it once you are done with the vigilance quests in Spinward Rise.

Off-hand: Elemental Fire Stiletto: Artifact class feature that upgrades our First Strike and artifact stat increasing our AP Gain. You will get it as soon as you hit Lv. 70 from Sgt. Knox.

Artifacts: After *[Lostmauth's Horn of Blasting], we still have 3 more artifacts. First, *[Sigil of the Cleric], our dailies can deal much more damage than any other artifact ([Token of Chromatic Storm] hits really hard and have a very nice debuff but the stats aren't great). [Lantern of Revelation] has very good stats: Critical/ArPen/CA dmg. [Kessell's Spheres of Annihilation] has similar stats: Power/ArPen/CA. [Sigil of the Wizard] (CW Artifact) is the only artifact which comes with Power and Critical so it's a very good choice. The last artifact will depend on your stats, you can go for more crit/arpen/hp/power in that order. In example, if you choose a [Kessell's Spheres of Annihilation], you can switch the Icewind Dale's first boon for AoE resistance while keeping 2 artifacts that will provide enough Combat Advantage I ended up choosing [Wheel of Elements] for the Power and the Stamina gain. Stamina can be a life saver in dungeons. I obviously do not have the CW sigil yet, but once I get my CW up I will be swaping out the Heart of the Red Dragon.

Accessories: BIS rings are: Personalized Adamant Ring of Recovery with 394 Power / 394 Recovery plus 2 Slots (offensive and defensive). I recommend Major Stamina Regeneration Jewel for the accessories (belt, cloak, rings) except in our augment companion, only Regen jewels works on them in the case you want to use them but the effect will be barely noticeable.

Necklace: [Lostmauth's Hoard Necklace] as mentioned before with the extra AP gain granted at Legendary lvl. 4% each 3s is amazing, it will become 50% of our total AP gain during a battle. It's a must to upgrade this artifact to max lvl asap. Cloaks with +8 AC are useless for DPS, it means 4% more damage resistance that won't make any difference.

Note: While you are achieving your goal (reaching the maxed stats) you might need to switch some enchantments in order to get the other stats that you need, like more ArPen, meaning Darks instead of Azure in offensive. 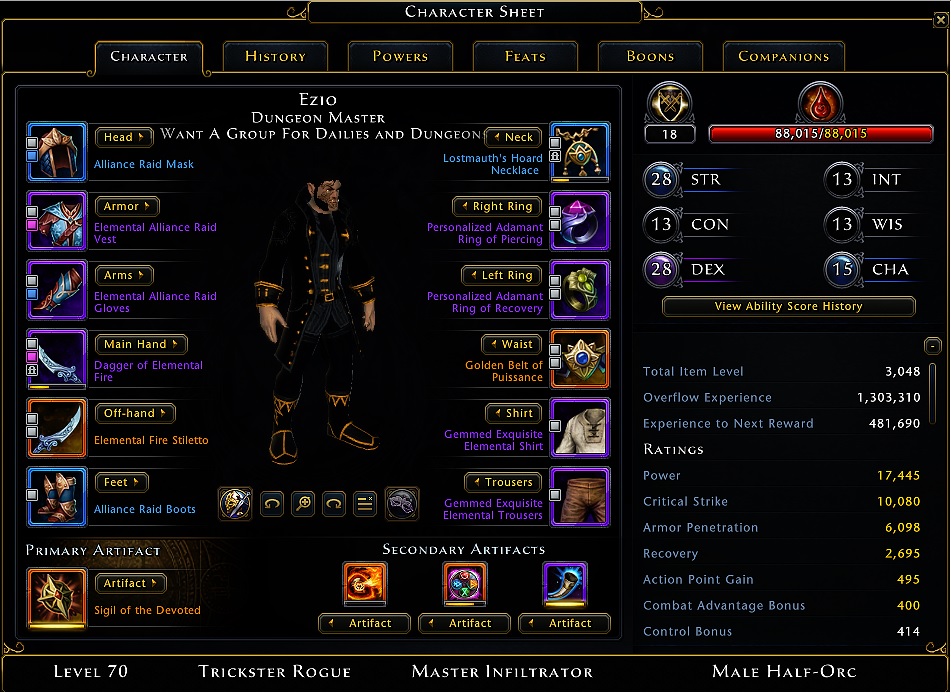