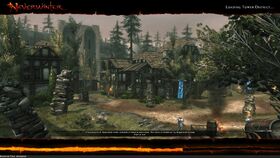 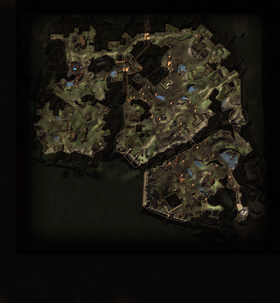 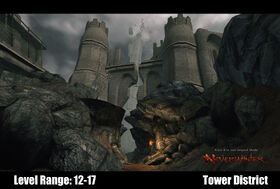 Tower District is a level 10-15 Adventure Zone. This zone is preceded by the Blacklake District, and is generally followed by the Spellplague Arc.

Tower District
The Tower District was once a place of great wealth, with many spires owned by lords, wizards, and wealthy merchant guilds. It was destroyed by an explosion from Mount Hotenow, a few decades before Neverwinter takes place, and has yet to be reincorporated into the city or be brought under the protection of Lord Neverember. Recently, a tribe of orcs called the Many-Arrows Tribe has claimed it as their own. They're lead by a fierce Orc named Vansi Bloodscar, who has taken up residence in the Cloak Tower. The Neverwinter Guard stands as the only force keeping the Orcs from pounding down the gates of Protector's Enclave.

This zone is a jumping off point for many class and race specific quests. Dwarves, Half-Elves, Half-Orcs, Fighters (both Guardian and Great Weapon) all have quests that begin here.