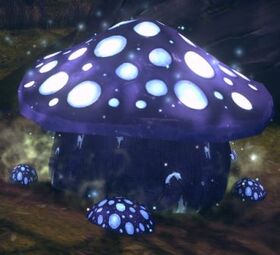 Kehl Skywatcher wants you to set fire to some giant mushrooms.

Torch 6 Witchcap Toadstools in the Dark Fey Enclave in Sharandar.

Kehl Skywatcher
Fomorians are foul, twisted creatures that cannot help but pollute all that is pure and beautiful. The swamp nearby was once a mighty river, but when Malabog's forces claimed the area, the fomorian king ordered his witches to plant Witchcap toadstools in order to foul the water.

As we fight back against Malabog's armies, we must also resist his desecration of our land. Seek out the Witchcap toadstools and burn them, but take care not to touch the foul things with your bare hands.

Kehl Skywatcher
It will take time to fully remove the Witchcap toadstools' pollution, but in time, with our aid, the waters will flow strong, pure, and clear once more.
Retrieved from "https://neverwinter.gamepedia.com/Torching_Toadstools?oldid=396518"
Categories: