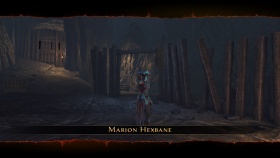 Xalliana
We're in luck. One of the Blackdagger Bandit leaders, the wizardess Marion Hexbane, controls their shipwrecking and salvaging from a nearby cave. Killing her will stop that operation and give us a chance to look for more clues about where to find the other leaders. This could be the first step to finding Traven Blackdagger himself.

Xalliana
Hexbane's death is a grand victory, but finding her journal and that map may be even more important. They should give us some good leads to finding the rest of the Blackdagger Bandits' leadership.

But first, every ship on the Sword Coast owes you a debt. Since they can't thank you, please accept this reward from me on their behalf.