From Neverwinter Wiki
Jump to: navigation, search
The Portal to Tuern 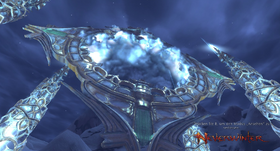 The Portal to Tuern is a quest that begins the final chapter of the Tyranny of Dragons Campaign and sets the stage for the Skirmish and Dungeon story lines on the island of Tuern.

Secure the Portal to Tuern in Icewind Dale.

Harper Boward
Now that we've discovered how to activate the portal in Icewind Dale, we need to secure it as soon as possible. I'm sure the Cult of the Dragon is moving to do the same even as we speak.

The factions are mobilizing, but I and the other faction representatives are putting together a small vanguard to arrive ahead of the main force so we can establish our presence as soon as possible.

You've done so much to help ensure the Cult does not gain a foothold. We would be honored to have your aid in this as well.

Harper Boward
The factions can take control of the portal now thanks to you. However, Rath Modar's betrayal ensured that Severin and his Cult of the Dragon army made it through to Tuern.

Our work, it seems, is not yet over. We need you and other heroes to pursue the Cult to Tuern and ensure that their foul schemes do not come to pass!