From Neverwinter Wiki
Jump to: navigation, search
The Hellthorn Traitor 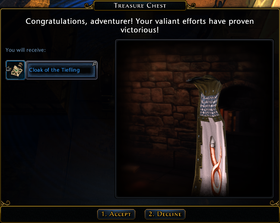 Item Reward: Cloak of the Tiefling

Enter the Duergar Stronghold and Rescue Nimor Ironvice from his captors.

Investigator Rannigan
Ah, <name>. I was finally able to identify the material you recovered from the Chasm. It's an exotic red metal with diabolic properties called hellthorn. Interestingly, hellthorn is only mined in the Underdark.

Once I knew the Ashmadai had contacts in the Underdark, I was able to requisition our best diviner. They discovered that the weapons were sold to the Ashmadai by some renegade duergar named Nimor Ironvice.

Unfortunately, Nimor's activities didn't escape notice. He was arrested and is being held in a duergar stronghold beneath Mount Hotenow. If you could bring this Nimor Ironvice back to us for questioning, Neverwinter would be grateful.

Nimor Ironvice
If you are not here to kill me, then what do you want?
Player
I'm here to rescue you.
Nimor Ironvice
Rescue me? Ha! Ha ha ha!

...Wait, you're serious, aren't you? Why in the Hells would a tiefling care about rescuing a duergar? Are you with the Ashmadai?

Player
Why were you being torturated?
Nimor Ironvice
Freelancing. The Ashmadai in Neverwinter were willing to pay almost any price for whatever hellthorn I could bring them. One night while I was on my way to the surface I was spotted by a duergar patrol. Caught me red-handed with thirty-five pounds of stolen hellthorn ore. Unlucky for me. It was my biggest haul yet, too.
Player
I'm here to take you to Neverwinter Guard.
Nimor Ironvice
The Neverwinter Guard? Oh, I see now. They want me to spill my guts about the duergar mining operations down here. Topsider scum! Rescue me from being tortured by my kin only to give me to surface-dwellers who'll torture me some more.

Hmph. Go on, then. Bring me to your Neverwinter Guard. But you can tell them that I'll never talk. And if I could stand on my own, I'd stick a blade in you right now.

Investigator Rannigan
Thank you for all that you've done. Nimor Ironvice is safely in our custody. I'm sure he will be able to provide us with important information regarding the Ashmadai and the duergar.

What's that? He claims that he won't talk? Well. We have our methods. We'll see.

You receive a letter from Vichorn Vrockwing after this quest inviting you to talk with him at the Driftwood Tavern in Protector's Enclave. If you do, you get the Baalzebul, the Fallen One lore entry.