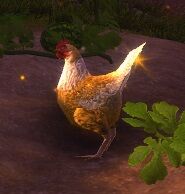 Summer Feast is a Contest that takes place during the Summer Festival zone, first present from August 29th, 2013 through September 18th, 2013 and then repeated during the 2014 version of the event (August 21-September 11). It last 15 minutes, at which point there is a 5 minute pause before the Hungry Trolls Contest. Like all Contests it is a zone-wide event in which participants accumulate points (though they can only be gained in the Fertile Fields region of the map) and there is no specific quest or action to take to "sign up", just the act of earning a point in the current contest cycle. When the contest completes participants will be ranked Bronze, Copper, Silver, or Gold based on total score ranking and rewards will be issued. If two or more people have the same amount of points, the later to reach that total is considered higher rank. In any case, all who score at least 1 point will get a reward.

Note: The 2013 version of the event was called Midsummer Feast, lasted 12 minutes and was followed by a 3 minute pause prior to the Hungry Trolls contest. The petal rewards were also different with Bronze/Copper/Silver/Gold lower 15/15/30/45 (doubled during the Height) and [Squash] being provided at all levels.

Help herd the pigs and chickens into their pens for the upcoming feast.

Herding: To herd, stand near an unherded animal, at which point a yellow 30 second timer will appear above its head (if a crossed red circle it is already considered herded by another). The animal will attempt to move in a general direction away from its current herder. If the timer runs or the distance between animal and herder becomes to great the animal runs away and becomes available for herding again. Chickens are in all directions around the farm, while pigs are a bit north. The rare Golden Chicken, if it appears, will spawn in a random location and their will be a zone-wide announcement when it does. It is recommended to herd from horseback if the option is available for better speed.

Corn: There are stalks of corn east and north of the farm that can be harvested. The quantity in each stalk is random (1-8, with above 5 being very rare). You must turn in corn in bundles of 10 by interacting with one of the many boxes and barrels inside the farm enclosure and the scoring / turnin obviously does not match with the npc description. Note that while the turn ins are in groups of 10, there is no limit to how many [Summer Corn] you can carry.

Based on your performance you placed in the *Bronze/Copper/Silver/Gold* bracket and earned the following reward: