From Neverwinter Wiki
Jump to: navigation, search
Straight to Helm 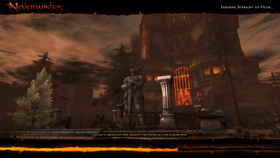 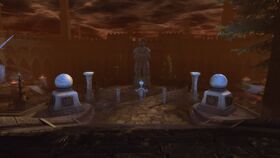 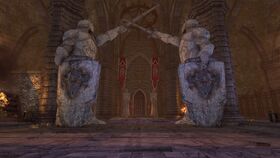 Ashmadai cultists are summoning a Pit Fiend in Helm's Cathedral. Storm the gates and defeat them!

Straight to Helm is a Skirmish set in the Helm's Hold.

Journal Entry
"The Ashmadai are trying to summon a powerful devil within the Cathedral. They must be stopped, and the only way to stop them in time is with a full assault on their ritual.

Should you be victorious, the riches of the Ashmadai are yours to take."

A Call to Arms Skirmish is an enhanced, limited time, version of a normal skirmish that allows levels 6-60 to queue for it without any other prerequisite and has an enhanced drop table. The Call to Arms for Straight to Helm was first held from October 3, 2013 to October 7, 2013. A second run is scheduled for January 29th to February 2nd, 2015.

CTA: Straight to Helm!
A limited time Call to Arms:Straight To Helm!

Call to Arms! The Ashmadai occupying Helm's Hold plan to summon a devilish pit fiend from the Nine Hells! Heroes of all levels of skill are called to help stop them!

To participate
You must be level 6 or higher and queue for the event using the button below or by pressing "k" on your keyboard.

Rewards
Driving the Ashmadai back gives players a chance at the following rewards:

Many of these rewards are only available during the Straight to Helm Call to Arms, so get them while you can! 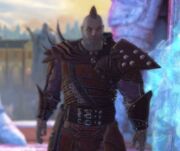 Barram Hannikar During Call To Arms

During the Call To Arms version of the event a standing between a pair of Ghost Paladins and near a rack of tiefling equipment. His only current purpose is to answer some questions about the event.

Barram Hannikar
Call to Arms! The Ashmadai are attempting to summon a Put Fiend inside the Cathedral of Helm's Hold.

Answer the Call to Arms alongside other heroes of Neverwinter and stop them!

Barram Hannikar
A Call to Arms is a special limited time event which allows characters from levels 6 to 60 to play together in the same skirmish.

Each Call to Arms has unique rewards for the heroes who join in the fight. Defeating the Ashmadai in Straight to Helm gives players a chance to find special rewards. Devilish Tiefling Weapons you can use to transmute the look of your equipment, Special Cruel Enchantments to empower your equipment, and the Ghost Paladin companion to fight beside you in battle.

These rewards are only available from this Call to Arms, so get them while you can!

Aelgar the Fierce
We need all heroes we can to fight the Ashmadai during this Call to Arms. So come and join the fight!

All adventurers from level 6 onwards may join up and fight.

The event can be joined by utilizing the Queue window and queuing for the Call to Arms event, when available.

Completion of the normal or Call to Arms form of this skirmish earns the Skirmish Achievement "Straight to Helm!"