From Neverwinter Wiki
Jump to: navigation, search
Storming the Keep 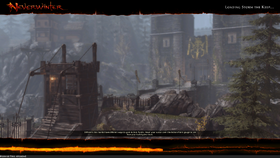 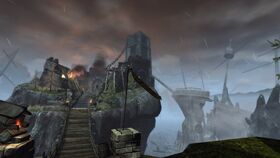 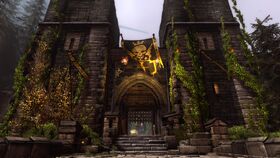 The Blackdagger Bandits are planning an attack on Neverwinter and must be stopped! Storm Cragmire Keep and kill Malus Blackdagger!

Storming the Keep is a Skirmish set in the Blackdagger Ruins.

Journal Entry
"Use the siege tower to enter the keep, then fight your way to Malus Blackdagger!"

Xalliana
Traven Blackdagger and his cutthroats must not be allowed to attack Neverwinter!
Player
Storm the Keep!
Xalliana
Finally some reinforcements who look like they can handle this mess!

We have managed to get a siege tower up to the bridge, but I can't get the troops to commit.

I need you to storm the Keep and kill Captain Malus Blackdagger!

On your way to the final boss you need to fight a large number of enemies including the mid-way Boss, Jareth Grim. The end boss is Malus Blackdagger. It is a 4-7 minute long fight depending on the damage of your group. Malus' combat will cycle through a number of abilities and then repeat. They include the following:

Malus will summon help at around 75% health. This includes one Elite and two Minion enemies.

Characters level 6 to 60 can queue for the skirmish. In addition to the skirmish queue, there is also a Sword Coast Adventures adventure, Storm the Keep.