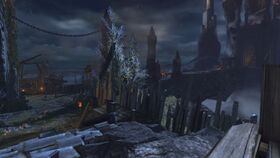 A view of the Sleeping Dragon Bridge 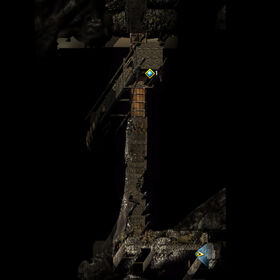 Private Hawthidon sends you to aid in the defense of Sleeping Dragon Bridge against a renewed assault by Valindra's undead.

Private Hawthidon
More undead are attacking Neverwinter! They are boiling out of Castle Never and storming the Sleeping Dragon Bridge!

If the bridge falls, they will enter the heart of the city, Protector's Enclave!

I must stay and deal with the Red Wizards. Please go to the bridge and aid the defenders!

Destroy the Undead Soldiers near the gate to our north so it may be opened safely. Then talk to Private Wilfred. He will get you inside the city and show you the way to the bridge.

Be careful, these undead are more aggressive than others you have fought. Tempus grant you strength!

After defeating the Harbinger[edit | edit source]

Private Wilfred
Sorry, should have been more cautious.

But when I thought of all my friends who died because of her...

Find Sergeant Knox and tell him what happened. Ask him to check in on my mother from time to time.

Player
Hang on, Private! I'll get help!
Private Wilfred
You have to stop her!

Lord Neverember is no saint, but he's better than the alternative. If Neverwinter fails here, Valindra will rule Neverwinter!

Find Sergeant Knox. He's one of Neverember's guards. One of the good ones...

I want to thank you for what you did on the bridge. We might have lost Protector's Enclave if the Harbinger had breached the walls.

Please look in the chest behind me for a token of my appreciation.

Sergeant Knox
We lost a lot of good people today... and the Harbinger appearing so close to the walls does not bode well for the safety of the Enclave.