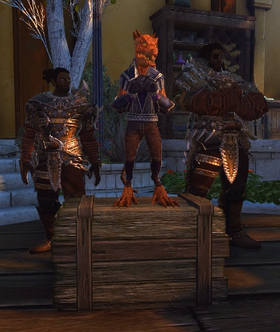 Rhix at his new location

Rhix at his old location

Rhix is an NPC who can be found in Protector's Enclave. He stands outside of the Seven Suns Coster Market, next to Wylandar Ilmarin who runs the Wondrous Bazaar. Rhix informs the player about special activity rewards, i.e. you can receive rewards from him for doing activities like skirmishes or dungeons. He will also buy special artifacts that you may receive from certain bosses, giving you Astral Diamonds for them.
For his own protection, Rhix has hired bodyguards who can be seen standing behind him. 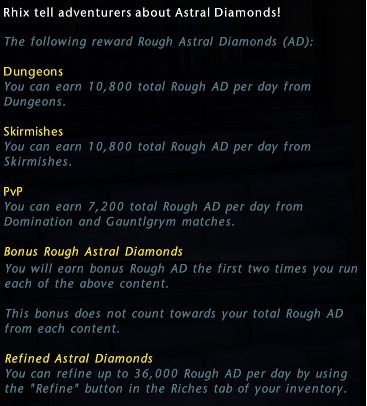 During the open beta, he stood next to Wylandar Ilmarin who runs the Wondrous Bazaar, and he had only one bodyguard. After an update, his position was moved away from the market wall and further towards the Auction House. He now has 2 bodyguards.