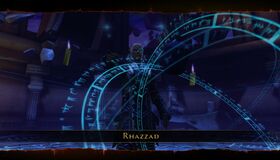 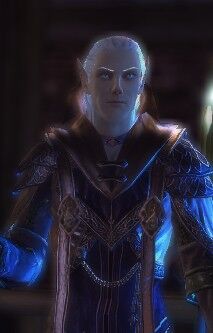 
"Of all the things revealed to me in the depths of the Chasm, the very existence of the Masters was the most potent. I saw them swimming through plague-fire, and I saw glimpses of the world from whence they came. I am still unsure if they created the Plague, or if they have just mastered its use. Soon, I will know for certain.

When my transformation is complete, I will prove my worth by seeing the entire city consumed by the Spellplague. Once my great work is done, I shall be powerful enough to join them in the Chasm's depths, and all will be revealed to me. I will be like a god, knowing all secrets, invincible for eternity. Just as the Masters promised me."

Rhazzad is a Drow wizard who is encountered the first time by the adventurer inside Joseph Linkletter's house, called by Joseph to help his wife Dorothea Linkletter who is affected by the Spellplague. Rhazzad manages an alternative, illegal hospital inside the Tower of Solace, where he keeps people affected by the Spellplague against the Protector's Law. Dorothea manages to regain control over her body thanks to an elixir made by Rhazzad, she is then brought to the Tower of Solace by the heroes through the Protector's Enclave Sewers which are inhabited by the Dead Rats.

A Warning from Quorthon
Tualo,

I know we parted on poor terms when last we spoke, but you must listen to me now. I have heard you've been conducting research with a new associate, a Spellscarred elven wizard named Rhazzad? If this is the person whom I think it may be, you are in grave danger!

Nearly a year ago I was visited by a tall elven wizard by that name who claimed to be researching the Spellplague. His methods were dangerous, and his motives suspect. I feared he was only interested in studying the Spellplague to exploit it for his own ends. I tried to reason with him, but he would not listen. He hired a company of adventurers for an expedition deep into the Chasm, claiming he would return with unimaginable power. I never heard from him again.

If your new friend is the same Rhazzad, then I urge you to cut off all ties, and assist him in no more research. There are forces down here beyond imagining, and if he has become their servant, I fear for all of Neverwinter. 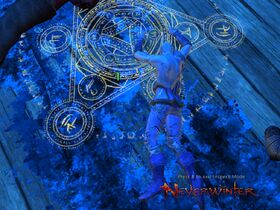 Tualo's body on a ritual circle

After Dorothea is brought to the tower, Sergeant Knox asks the heroes to investigate about Rhazzad to a person he was seen talking with, the Neverwinte'r wizard Tualo the Bright. The heroes find Tualo's house overrun by Foulspawn and find the body of Tualo, tricked by Rhazzad, near a portal to the Far Realm. After closing the portal, the heroes are asked to find Linkletter and stop Rhazzad, however the mage opens various portals around the streets of Neverwinter in order to get the time to finish a ritual at the Tower of Solace, which ends with a burst of Plaguefire that inflames the neighbourhood and partially destroys the Tower itself. The heroes flee through the sewers, slaying the Dead Rats remnants and opening a safe escape route for the survivors.


"If I am to complete my transformation, I will need to make certain I have complete mastery over the process. To this end, I must conduct several experiments. Though the stories I've spread about the Tower of Solace bring me a constant stream of new test subjects, too many are already sick.

The Masters must have heard me, for they have provided! A desperate soldier from the hated squad of Sergeant Knox has sought me out, looking for treatment for his dear wife. Dorothea Linkletter is healthy, and only recently infected. I will control the process of transformation in her, study it, and master it. Then, once the portals are open and the Far Realm draws close, I shall apply what I've learned to foolish Josef to make certain I am ready for my own metamorphosis. 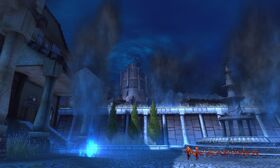 The tower of solace from a street crawled with PlagueFire

Sergeant Knox asks the heroes to help the Neverwinter Guard to regain control of the Tower of Solace. Linkletter storms alone inside the tower, followed by the heroes, while Sergeant Knox takes control of the tower's surroundings. After some fights against the Foulspawn foes that roamed the magically transformed tower, the heroes reach Linkletter while he is turned into a Plaguechanged by Rhazzad. The heroes leave the defeated Linkletter to his wife Dorothea and then reach the top of the tower, where Rhazzad completes his transformation into a foulspawn. Tricked by the Far Realm Masters into believing that he will become a god, he is finally killed by the heroes.