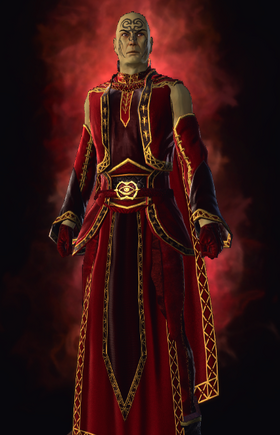 Red Wizards of Thay
Red Wizards are specialized magicians who hail from the Kindgom of Thay. Originally they were an organization whose members devoted themselves to mastering a single school of magic. Each school within the Red Wizards was lead by a "Zulkir" who was the most skilled among them.

In 1377 DR the then zulkir of necromancy Szass Tam siezed power and killed or exiled his peers, the zulkirs of the other schools. Consolidating his political power within Thay. Today Thay is still magocracy, albeit lead by Tam and with a distinctive focus on necromancy.

Red Wizards were the allies of Valindra during her attack on Neverwinter. Also known as Red Wizard of Thay in Neverdeath Graveyard.

Red Wizard is an Elite type foe, while Red Wizard of Thay is Standard type.