From Neverwinter Wiki
Jump to: navigation, search
Quenching the Flames 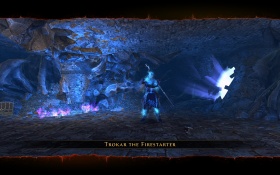 Lieutenant Trell
The plaguechanged creatures we face are formidable but their lack of organization has always given us a small advantage. But now that advantage has been lost. When we launched our attack against the plaguechanged we discovered they were being controlled by a creature called Trokar the Firestarter.

Trokar is a potent spellcaster and savvy enough in the ways of war to control the mob of chaotic creatures he commands.

Our scouts report that he has taken up residence in the ruins just north of here. If we hope to halt the advance of the plaguechanged Trokar must be eliminated.

There is no walkthrough for this quest yet. You can help Neverwinter Wiki by writing one.
Retrieved from "https://neverwinter.gamepedia.com/index.php?title=Quenching_the_Flames&oldid=497971"
Categories: