The savage werewolves of the Gray Wolf barbarian tribe have issued a challenge to anyone who thinks they can survive their Totem Pit!

A Skirmish located in Vellosk. No quest tied to it.

Consists of 9 waves, featuring a normal, Shadow Wolf accompanied, and boss led wave each of the three types of foe (spiders, undead, and werewolves).

A Call to Arms Skirmish is an enhanced, limited time, version of a normal skirmish that allows levels 6-60 to queue for it without any other prerequisite and has an enhanced drop table.

The savage werewolves of the Gray Wolf Barbarian Tribe have issued a challenge to anyone who thinks they can survive their Totem Pit!

To participate
You must be level 6 or higher and queue for the event using the button below or pressing "k" on your keyboard.

Rewards
Surviving the Pit Fight gives you a chance at the following rewards.

Many of these rewards are only available during the Pit Fight Call to Arms, so get them while you can! 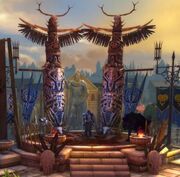 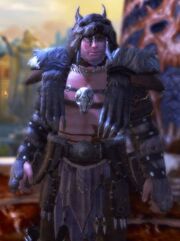 Krim Wolfclaw During Call To Arms

During the Call To Arms version of the event a stand appears near the center of Protector's Enclave with Krim Wolfclaw on it standing next to a box of barbarian gear and a shadow wolf. His only current purpose is to answer some questions about the event.

Krim Wolfclaw
Call to Arms! The Tribes of Vellosk have opened their Totem Pit to all comers!

Gather your team to fight them off!

Krim Wolfclaw
A Call to Arms is a special limited time event which allows characters from levels 6 to 60 to play together in the same skirmish.

Each Call to Arms has unique rewards for the heroes who join in the fight. Surviving the Pit Fight gives players a chance to find special rewards. Brutal Barbarian Weapons like the ones on the display stand next to me allow you to transmute the look of your equipment, special Cruel Enchantments empower your equipment, and the Shadow Wolf mount for you to ride.

These rewards are only available from this Call to Arms, so get them while you can!

Krim Wolfclaw
The Gray Wolf Tribe has issued its challenge to all the heroes of Neverwinter who have proven themselves in battle. Accept their challenge and join the fight!

All adventurers from level 6 onwards may join the battle. The event can be joined by using the Queue window and queuing for the Call to Arms event, when available.