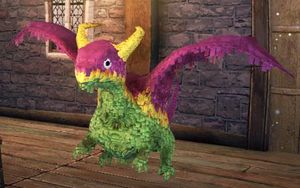 A vicious Piñata prepares for battle

The Piñata is a consumable that can be purchased during the Summer Festival.

When the item is used, it spawns an immobile, non-attacking Piñata monster directly in front of the summoner. As the monster is damaged, it will periodically drop random loot nearby, and, once killed it, will drop random enchantments/runestones directly to the inventory of the original summoner.

The Piñata's loot (outside of the enchantments/runestones once killed) will fall to the ground randomly near it and is auto-pickup and free-for-all. A character who neither summoned the Piñata, nor contributed to its defeat, could run around and collect the loot. If exclusive loot is desired, going to an isolated spot or into a private instance (a foundry mission for example) is recommended.

If multiple Piñatas are summoned by the same caster at once (separate stacks do not seem to share the same cooldown), the earlier ones will rapidly explode giving no reward. A Piñata is also destroyed if the summoner leaves the instance it is in.

Binds on Pickup
Recharge Time: 90
Use: Summon a pinata in front of you that you can hit for rewards. When the pinata is destroyed, some of the loot will magically fly into your inventory.
Filled with treats and surprises, a fun activity for parties.
Consumable
No Level Requirement