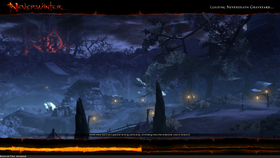 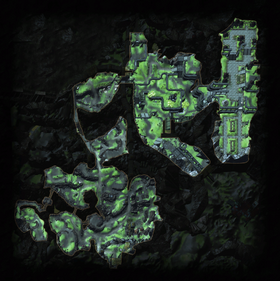 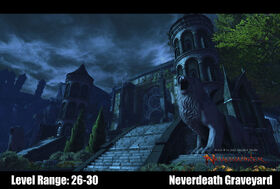 The Neverdeath Graveyard, or simply Neverdeath, is the burial place of the city. Doomguides from the Eternal Order of Kelemvor are responsible for protection of this area.

Graveyard History Since the Ruining & Body Snatching
The last 26 years, following the Ruining, have been unkind to Neverwinter. For the most part, the city has been in ruins. Only a small, determined population has hung on and kept the city from being overrun by outside forces.

During these years, the dead have been buried in any available space. These recent graves have much simpler markers than those from prior time periods, and are clearly hand made by the mourners left behind.

Since the Spellplague, the Graveyard has seen a great deal of body snatching. While the Lord Protector has devoted few of his resources to stopping the practice, so far it has been sporadic and piecemeal. Lately, though, bodies have been disappearing with much greater regularity and in far larger numbers.

A tattered ledger sheet from the Clockmaker's Catacombs sheds light on why: columns and rows fill the page, listing hundreds, maybe thousands, of bodies -- where they came from, where they've been shipped, and what they're being used for. Someone is gathering corpses at an astonishing rate.