From Neverwinter Wiki
Jump to: navigation, search
NEVER OUR LORD!
What do you call someone who takes over a city for his own profit?

Who floods the streets with mercenaries and fills the coffers of the crooked? Who lies about his claim to the throne? Who crushes protest, and who sends the sick off to die? You'd never call that man Lord of your city! Neverember is no Lord of Neverwinter! Fight the occupation! Death to the Pretender! 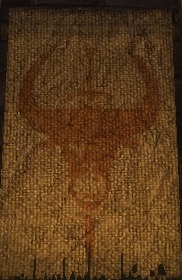 The Nashers are the first true antagonist faction met in the game after the tutorial's undead. They take their name from the legendary Lord Nasher Alagondar, who led victoriously the city against the invasion of Luskan. Their symbol, a minotaur head slain by a sword, remembers one of Nasher's battle when he defeated a minotaur alone, killing him by putting his sword into the beast's eye.

They are a violent faction of the anti-Neverember resistance group known as the Sons of Alagondor. Their leader, Arlon Bladeshapper, took their control after the violent death of the Sons previous leader Cymril, claiming to be a descendant of one of the Neverwinter Nine, Nasher's personal guard, and so the most rightful claimer of the throne. His second-in-command, the Uthgard barbarian Karzov, leads the rebel's forces in Blacklake District.

Of the rebel factions, the Nashers are among the most vicious in their methods. They seem more like a gang than a movement, and often clash with other rebel factions over their methods, having no qualms about using rioting, assassination, theft, and sabotage as weapons against Neverember, no matter how many innocent civilians are hurt by their actions.

Appearences in the game[edit | edit source]

Nashers are found on the first quests in Protector's Enclave and all around the Blacklake District, which they took as their territory. Their basic units are made of Nashers Recruits and the Nashers Snipers, which forms the basic infantry and marksman of the Rebels. Their elite is instead composed by the brute Nasher Enforcers, six feet tall warriors with axes and shields, and the Nasher Hexers that can summon circles of flame under their enemies feet. 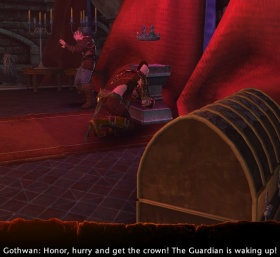 Honor as first seen while stealing Neverwinter's Crown with Gothwan
THEFT OF THE CROWN: KARZOV'S ORDERS
"The undead attack is a better distraction than the riot we were planning, so we're moving up our operation. Your orders are to get into the vault beneath the Temple while the guards are too busy fighting the undead.

Once you're in, grab the Quartermaster and make him tell you where the Crown of Neverwinter is kept. Then leave the rest to Gothwan and Honor. Remember: We're only after the Crown. Touch nothing else! We can loot the rest once we rule the city, and we can't risk angering the dead."

The Nashers exploit Valindra's attack to sneak inside the crypts under the Hall of Justice Vaults, the former Temple of the now-dead justice god Tyr (now used by Lord Neverember to store the ancient treasures, relics and artifacts of the city) in order to steal the crown. However both them and the players meets resistance from the Undead. While the players confront the Guardian of the Nine, the Nasher agents Gothwan Cooper and Honor Reigh have time to steal the crown and escape. Honor is then confronted and defeated in the tunnels beneath the city. A letter is found on her body that leads the quest for the crown to Blacklake District.

That adventurer saw us in the vault. We can't stay in the Enclave. I'm going to sell off my share, then I'm heading to Blacklake. We should be safe with Karzov and his Nashers. 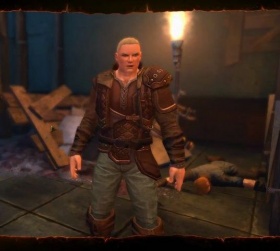 Gothwan, while being freed from the Dead Rats
THE CROWN PLOT
"Karzov,

If what you say about Gothwan is true, then we can no longer plan to smuggle the Crown out of Blacklake through the sewers. The Rats would certainly betray us and try to take it, and would probably succeed since the sewers are their home turf. You'll have to sit tight and hold out against Neverember's soldiers for a little while longer while I figure out another way to get the Crown out of Blacklake.

I know that you would rather I abandon the other plans I'm working on and just come to Blacklake personally. We've had this discussion before, and my answer is still the same. I'm working closely with our... other allies on these plans, and they wouldn't be happy if I abandoned them. And considering how much we need them right now, I want to keep them happy.

The Rat's betrayal, while we should have expected it, is an unfortunate delay. But if you can keep control of Blaklake until we can smuggle the Crown out of there, it will all be worth it. I will set the Crown upon my brow, and Neverember's lies will be laid bare for all to see. The Nashers will take control of all of Neverwinter, and we will reclaim the city's former glory!

After a brief investigation in the district's street during the quest Seeking a Suspect the players finds that Gothwan have been kidnapped by the Dead Rats gang. The heroes storms the Rat's hideout and free Gothwan, which felt betrayed by the rebels and decides to collaborate with the Neverwinter Guard. 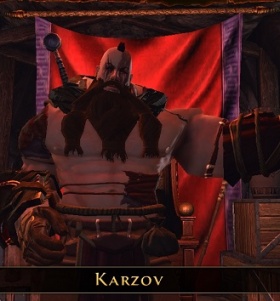 Fighting Karzov
KARZOV
Karzov is the second-in-command of the Nashers, the top lieutenant to the faction's true leader, Arlon Bladeshaper. A crafy but violent man, Karzov has never hesitated to use both subtlety as well as outright force in his plans. Famously, he once organized a very damaging riot to distract the Neverwinter Guard while he and a handful of other Nashers assassinated one of the Guard's high-ranking officers.

It is well-known that Karzov is in charge of the Nasher takeover of Blacklake. His motives for doing this were not understood, however, until he masterminded the theft of the Crown of Neverwinter. With Bladeshaper nowhere to be found, it is unclear whether Karzob is acting as part of a larger Nasher plot, or if this is the first step in some sort of coup.

The players enters in the burning Nasher Safehouse with the agent Zoey Fargo to find clues about the location Karzov before the building crumbles. They reach the Nasher Headquarters in the last part of the District, where they find and defeat Karzov and retreve the crown. 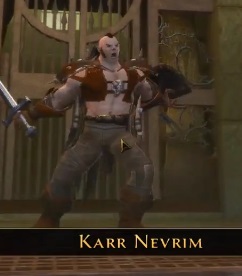 Fighting Karr Nevrim
NEVRIM'S ORDERS
Double the watch at the sewer entrance. The Neverwinter forces are becoming suspicious... they may start poking around down here.

Later on in the Tower District the players find a message on a dead courier. Captain Janros reveals that the message is about another group of Nashers organizing in the district's sewer led by the Half-Orc Karr Nevrim, a powerful ale lover warrior. During the quest Sewer Crawl Nevrim is defeated by the characters.