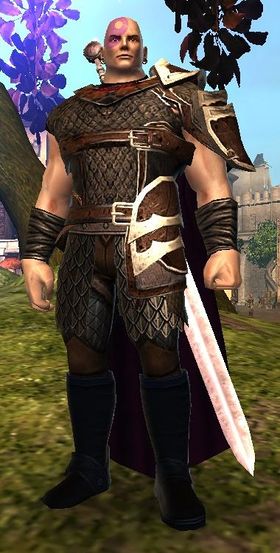 Minsc as seen in Protector's Enclave.

Minsc is an NPC who can be found in Protector's Enclave. He stands guard of the large tree, just across from the Seven Suns Coster Market. Minsc is a very large man standing next to Archdruid Morningdawn. Minsc is a kind-hearted, but also confused warrior known for his habit of talking to a hamster. He believes that the animal, called Boo, is a Miniature Giant Space Hamster. Minsc appears in all the games in the Baldur's Gate series. He has a very simplistic view of the world, and he's often quick to decide someone is evil and should be attacked.

In the comic "Legends of Baldur's Gate", a statue depicting "the beloved ranger" was accidentally struck by a spell cast by the wild mage Delina which was meant for an attacking Gargoyle. Somehow, the spell restored Minsc and Boo to life. This event seems to be part of the Neverwinter D&D lore as Archdruid Morningdawn tells you what little she knows about Minsc.