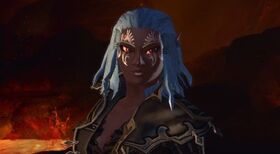 Menzoberranzan Renegades are one of the playable races in Neverwinter. They are available to those that have purchased the Hero of the North pack. As of the release of Fury of the Feywild on August 22, 2013 the option to select them was moved to a drop-down menu under the "Drow" portrait on the racial selection screen.

Note: This racial choice is distinct from Drow which was released free to all players with the launch of Fury of the Feywild. 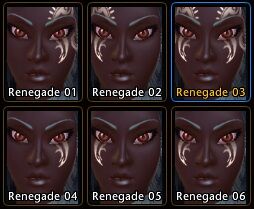 In-game: Drow from the city of Menzoberranzan are raised in a world of lies and treachery. The noble houses of these dark elves are in constant conflict, vying for power and the favor of their evil goddess, Lolth the Spider Queen.
Sometimes a drow tires of the constant strife. Others see through the corrupt dogma of the way of Lolth and seek a better way. There is no place within Menzoberranzan society for such drow and when discovered are branded as renegades, outcast from their house, and exiled from the city.

Drow, more commonly referred to as dark elves, are similar to their elven kin but have midnight black skin. They typically live in The Underdark in matriarchal societies serving the evil deity Lolth. Some drow reject this way of life, fleeing to the surface of Faerûn, and acting to prove not all of their race is inherently evil.

Considered traitors and outcasts by their own people, many of these drow come to Neverwinter to find acceptance and protection from what lies beneath.

In game a Menzoberranzan Renegade has available to it a distinct set of tattoos labeled "Renegade 01" through "Renegade 06". These do not have to be selected and can be colored as normal tattoos. Due to a glitch the icons for these tattoos only show up when the male "face 06 - young" or female "face 01 - young" head options are selected.