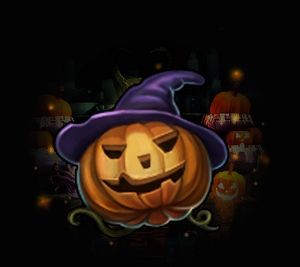 The Masquerade of Liars is an annual calendar event that is Halloween-themed.

To participate:
Come to Protector's Enclave and hun for Liar's Charms to trade with wandering illusionists for Masquerade Tokens used in the Event Store. Liar's Charms will also drop randomly from defeating monsters near you in level. 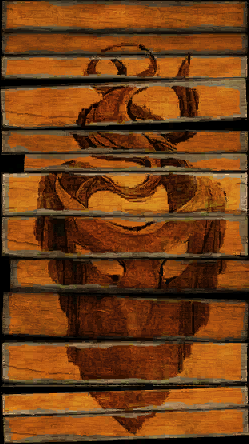 "My greatest trick was convincing everyone of my own death."

The Masquerade of Liars is a festival of frivolity and misrule. It celebrates costumes, treats, and the freedom of appearing to be someone or something you're not. Illusionists wander the streets and entertain the crowds with phantasmal transformations, appearing as monsters and notables to the delight of all.

Heroic Adventurers can participate further by gathering Liar's Charms in their adventures to exchange for Masquerade Tokens, which can be used to purchase special items from the Masquerade's store, located on the event podium in Protector's Enclave.

The Masquerade Master promises that this new yearly festival will grow every time it's held, and appears to have Lord Neverember's full support.

Of Rule and Misrule in the Masquerade of Liars
Liar's Night is traditionally a time of misrule, when authority is upended, and all people can speak their mind from behind the safety of a mask. While Lord Neverember claims his purpose for supporting and extending the festival of Liar's Night into the Masquerade of Liars is simply to entertain the city, not all believe his reasons are so simple.

One popular theory is that Neverember is using the Masquerade of Liars as a way to relieve some of the tensions the city of Neverwinter has faced in the last few years. Between attacks from orcs and the undead, many of the city's citizens need a chance to laugh at their fears. Seeing illusionary duplicates of the city's foes and notables acting like fools helps to relieve some of these built up anxieties.

Those with a lower opinion of Lord Neverember see the Masquerade as a grand distraction, meant to divert attention from the real threats facing the city. Some even charge the real purpose of it is to help prop up Lord Neverember's claim and hide the mistakes made during his rule.

Other theories run the gamut, from the Masquerade being a Thayan conspiracy to it being a cover allowing the Masked Lords of Waterdeep to judge Neverember's progress while remaining incognito. Many of these theories focus on groundless rumors about the Masquerade Master, and they claim he exerts all sorts of extraordinary influence.

Behind the Masquerade
Transforming the single evening's festival of Liar's Night into the Masquerade of Liars required a great deal of effort and no small amount of coin. Both were provided by Lord Neverember's generosity.

The mysterious Masquerade Master and his staff form the backbone of the Masquerade's organization. They are the ones who have commissioned the Liar's Charms, paid alchemists for potions, and carved pumpkins by the cartload. Those who've seen the Masquerade Master in action say he must have run a large organization before, adding fuel to the rumor that he's actually one of Waterdeep's Masked Lords here to check in on Lord Neverember.

The Illusionists of Neverwinter's recently re-opened College of Magic have provided all of the spells and phantasms for the festival. It's rumored they were spurred to volunteer their help based on stories about what the College's School of Evocation and the School of Transmutation are planning for the upcoming Midwinter festivities.

One question no one has been able to answer is how exactly the Masquerade Master managed to hide Liar's Charms all across the Sword Coast. Some say it would take an army of skilled thieves to do so, but such ludicrous notions are considered mere fancy by most.

Liars' Night and the roots of the Masquerade
Neverwinter's Masquerade of Liars is based on the long-held festival of Liars' Night, traditionally held on the evening of the 30th day of the month of Marpenoth. Liars' Night originally paid tribute to Leira, the goddess of illusions, and Mask, the god of trickery and thieves. Though both of these gods were slain over a century ago, Liars' Night lives on as a celebration of misrule, disguise and trickery.

During Liars' Night, folk of all walks of life don mundane or illusionary costumes to disguise themselves and play at being other than what they are. People also carve faces onto hollowed-out pumpkins to represent the person donning a mask, then place a lighted candle inside to represent the truth of their soul. By tradition, lies told and embarrassing things done while the candle is list don't count against a person, and misfortune is supposed to come to anyone who intentionally blows out someone's candle or smashes their pumpkin.

Before the Spellplague, spells of illusion were very common during Liar's Night, and often the streets would be filled with illusionists performing for crowds of revelers. This tradition is slowly returning as the horrors of the Spellplague fade from memory. However, many towns are still cautious about allowing mages of any sort to perform publically, so wealthy folk have begun to schedule private illusion shows for their distinguished guests.

Tricks and pranks of all sorts are common on this night, and folk expect lies and foolishness. By custom no deals are made nor contracts signed during the day of Liars' Night, as no one trusts that both parties will abide by them. Pickpocketing used to be common during Liars' Night, so few folk carry much money with them. Instead, people fill their pockets and belt pouches with candles and treats. Traditionally, pick pockets are supposed to take the candy and leave a token in return, but this has translated over the years into people exchanging candies.

﻿Of the greatest Mask of all
One of the two deities Liar's Night originally venerated, Mask was the ancient god of thieves and tricksters. Venerated for centuries by rogues, cutpurses, confidence men, and conspirators, Mask was known for numerous tangled intrigues and betrayals. Though dead for over a century, Mask's presence casts a long shadow to this day.

Mask required his worshippers to steal and deceive, preferably both at once, and allowed them to keep all that they gained save for a tithe to his church as Mask's tenants were that wealth was for those who could take it. The only proscriptions Mask had for his followers was to avoid politics, insisting instead that they deceive and swindle on a more personal level.

The Clergy of Mask were known as Darkfingers or "Darks", and the brotherhood of Mask's followers were called the Circle of the Gray Ribbon. Mask's clergy often exhorted his worshippers to bigger and bolder acts of thievery and deceit, eschewing cut-purse work for stealing fine jewels, loaded coaches, or even entire merchant ships. Mask looked with special favor on those who managed both to steal and deceive at the same time, such as forgers and mountebanks of all kinds.

Mask's powers waned in the years preceding the Spellplague. It was said he lost some of his powers to Cyric, and that he betrayed and slew his ally Leira, goddess of illusion and deceit. After several more defeats and injuries, in 1374 DR Mask relinquished his divinity, life, and powers to the Goddess Shar who claimed he was but her herald. Some elements of his power were also claimed by the Arch-Devil Mephistopheles and one of the princes of the Shadovar.

Despite this, rumors abound that Mask may return some day. After all, what greater trick could the god of thieves play than convince everyone of his death? 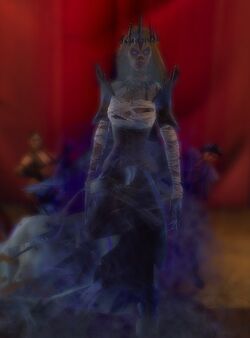 Found throughout Protector's Enclave, Masquerade Illusionists give 1 [Bag of Illusionist's Treats] in exchange for 1 [Liar's Charm], but only one at a time. Some of the illusionists patrol, and some are stationary.

A map of illusionists (red) and pumpkins (orange) can be found at: http://i43.tinypic.com/ejx2mc.jpg (Source)

Scattered throughout Protector's Enclave are lootable pumpkins. Characters must have fewer than 5 Liar's Charms in their inventory to loot a pumpkin. Pumpkins contain Liar's Charms and occasionally drop the temporary fashion masks from the Masquerade Vendor.

During the event, the [Bag of Masquerade Tokens] can be purchased from the Zen Market for 125