From Neverwinter Wiki
Jump to: navigation, search
OBOULD MANY-ARROWS
King Obould the First of Many-Arrows was a brutich but intelligent orc born to the sabage orcs dwelling in the wilderness around Mithral Hall. His cleverness and abilities as a leader distinguished him at an early age as a conqueror.

Through many campaigns, he battled the forces of Citadel Felbarr, Mithral Hall, and even Silverymoon, terrorizing the Silver Marches for years. To aid him in his battles, Obould underwent a ritual to demand Gruumsh's blessing - which the rage god granted - and before long was known to orcs as "Obould-Who-Is-Gruumsh".

Despite his many conquests, Obould began to crave peace and the stability of a strong realm. Under protest from his followers, he established the Kingdom of Many-Arrows, the first stable and sustainable orcish state in Faerûn. Upon his death, he was elevated to godhood as an exarch in service to Gruumsh, and given a place in Nishrek. 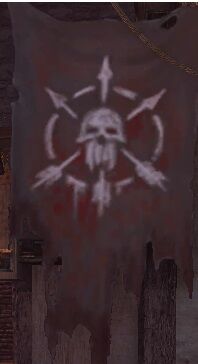 The Many-Arrows tribe are one of the factions met in Neverwinter. Despite being a quite pacific kingdom, an hostile rebel army of orcs led by the Spellscarred orc Vansi Bloodscar have taken control of Neverwinter's Tower District, the former heart of the city's economy.

Appearences in the game[edit | edit source]

MANY-ARROWS CAMP
When the orcs Many-Arrows Tribe arrived in the Tower District, they established their base camp in the shadow of the Cloak Tower.

Since then, it has grown into a fortified camp where the leaders of the orcs gather before raiding the rest of the Tower District.

The Many-Arrows orcs are found all around Tower District. The weakest members are Drudges and Axe-Throwers. BeastMasters watch the district with their Wolves. Sappers, Taskmasters and Battletested orcs forms the elite warriors of the tribe, while the Eyes of Gruumsh are the One-Eyed God priests. Vansi's spellscars abilities are shared with some Drudges and SpellScarred Commanders, the latter one acting like the Eyes of Gruumsh.

Players are requested to engage in a number of actions against the orcs, including killing a certain number of them and/or a certain kind, take bake supplies from their territory and recover their battle plans. They are also asked to go to Merchant Guild Hall to kill their leader Kartok Paingiver and then to the Orc Barracks to slay the commanders Lurg Bloodspear, Droghtu Elfeater and Kragmar Deepscar

As an optional task, the heroes are finally asked to enter The Cloak Tower and slay Vansi Bloodscar and her generals.

The Many-Arrows Tribe are a tribe of Orcs in Neverwinter.