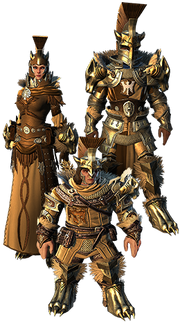 Completing this collection will give you an additional bonus of

10.
Lionsmane armor relies on the sturdy base design of guild armor, focusing on improved defense of vital areas in man-to-man combat. The aesthetic of this armor calls to mind the lion, a greater cat known for its skill at hunting as part of a pack. Gladiator armor was constructed to allow the wearer to outlast any opponent.

This is the strongest set of PvP, tank focused equipment available at the launch of Module 7.5: Stronghold Siege.

— Earn [Guild Marks] from donating to your guild's coffer.
— Earn [Seal of Triumph] from emergin victorious in a domination match.
— Earn [Banner of the Fallen] from participating in Stronghold Siege.


Upgrade your stronghold marketplace to rank 3 and use the above currencies to purchase this equipment from your guild armory.

This armor may be upgraded via Elemental Infusion, speak to Urgus Battlehammer in Caer-Konig for more details.