For information on the companion, see [Leprechaun].
Leprechaun 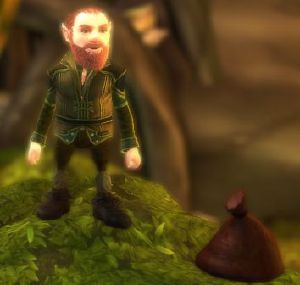 A Leprechaun and his fabled bag of go... of keys.

A Leprechaun is one of several identical NPCs between the main Iliyanbruen camps in Sharandar and the lairs such as Gnarlroot Caves, Witch Fen, and Tower of Celadaine. Each day a single one of them can grant a free [Dark Fey Key] to you that can be used to unlock Campaign Chests, and they all sell additional ones as well.

Leprechaun
The filthy dark fey, they think themselves kings!

Why don't you go forth and teach them some things!

Leprechaun
If you have the gold, then I have your key.

But no need to fear: the first one is free!

Completing the Have a Key daily quest will give you one Dark Fey Key per day.

Dark Fey Keys are also available for purchase from this and other Leprechauns throughout Sharandar.

Leprechaun
Enchantments and gear, you'll find in a chest.

It may take a few tries, to find what is best!

Each Campaign Chest grants a random piece of equipment available only in Sharandar.

Additionally, each Campaign Chest grants a shard of an Enchantment available only in Sharandar. Fuse four enchantment shards to create a complete enchantment.

Leprechaun
In each lair, a boss you'll have to defeat,