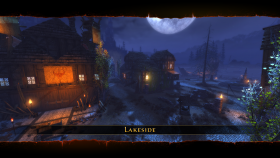 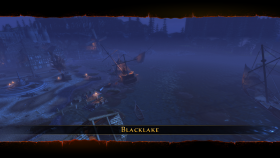 Blacklake - Scrying Stone view
Lakeside
The lake for which the Blacklake District was named still sits in the center of the district. However, it has been utterly polluted by ash and debris from the eruption of Mount Hotenow, as well as by filth and rubbish from the vagabonds and vagrants, who make their homes in nearby ruined houses. The lake looks more like a midden pit of thick, black sludge these days than a body of water.

Hazel the Alchemist, working from nearby the lake, has been studying the sludge. Although her findings were inconclusive, she suspected that the sludge had somehow become composed of something else beyond what she had expected. It had strange, almost magical properties, although where such properties could have come from is a mystery.

Lakeside is a point of interest located in the soutwestern section of Blacklake District.