Dragon-servants; cowards; weaklings. Kobolds are short, reptilian humanoids with craven and sadistic tendencies. They band together in large nests of dozens or more individuals and bury themselves in overgrown forests, dark places underground, or wherever their Dragon overlords build their dens. Kobolds surround their lairs with traps and warning devices like spiked pits, tripwires attached to crossbows, and other similar mechanical tricks, and spend most of their time patrolling their environment. They are also good miners, and often live in the caves they are exploiting.

In a Kobold's eyes, Dragons are god-like beings. The little humanoids revere the great reptiles with devotion and are willing to endure any sacrifices when it comes to pleasing their masters. This partnership is not infrequently a one-way relationship, as dragons' opinions of their “servants” usually hinges upon the kobolds' ability to locate treasure – and their potential to become late night snacks for their masters. 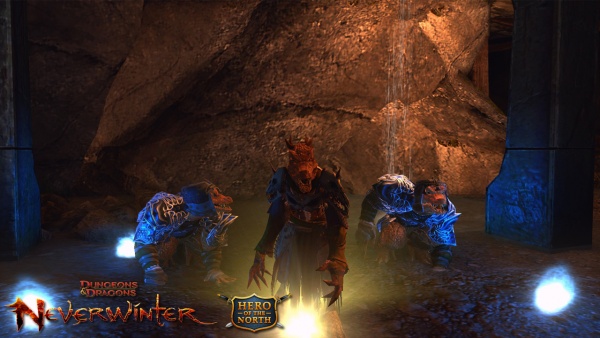 Kobolds also have enmity towards every other sort of humanoid or fey, with a particular hostility against gnomes. Listening solely to the word of their Wyrmpriest leaders – religiously devoted kobolds with a few magic powers linked to the dragons they serve – kobolds carry out the will of their dragon masters, spying from their warrens in city sewers or underground cave networks.

In combat, kobolds are notorious cowards, only going on the offensive with overwhelming odds in their favor. Skulking amidst their dark lairs they hide from stronger foes and swarm to overwhelm weaker ones. Unless a commanding leader is present, they will flee at a moment's notice if a battle looks like it's turning sour. Kobolds are quite capable of group tactics if being led by the stronger members of their race, including Wyrmpriests or the heavily armed Dragonshields.

Kobolds can be found in many places in Neverwinter. They have made their way into the sewers beneath the city, placing deadly traps for unwary adventurers and causing troubles for nearby denizens. As the Neverwinter guards have more pressing matters to attend to than clearing out the vermin, the kobolds have made quite a home out of their subterranean hideouts. There are also rumors that a large group of kobolds has become ensconced within Mount Hotenow, whispering their reverence for one of the “Great Red.” Adventurers should be careful when they step into the volcano's belly, of kobolds and far less cowardly adversaries.