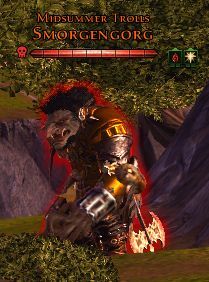 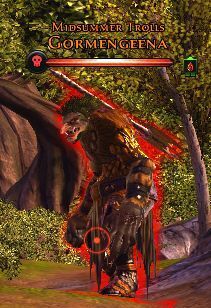 Hungry Trolls is a Contest that takes place during the Summer Festival zone, first present from August 29th, 2013 through September 18th, 2013 and then repeated during the 2014 version of the event (August 21-September 11). It lasts 15 minutes, at which point there is a 4 minute pause before the Water Battle Contest. Like all Contests it is a zone-wide event in which participants accumulate points (though they can only be gained in the Grillin' Grounds region of the map) and there is no specific quest or action to take to "sign up", just the act of earning a point in the current contest cycle. When the contest completes participants will be ranked Bronze, Copper, Silver, or Gold based on total score ranking and rewards will be issued. If two or more people have the same amount of points, the later to reach that total is considered higher rank. In any case, all who score at least 1 point will get a reward.

Note: The 2013 version of the event lasted 12 minutes and was followed by a 3 minute pause prior to the Summer Feast contest. The petal rewards for Bronze/Copper/Silver/Gold were lower as well: 15/15/30/45 (doubled during the Height).

Defeat the Trolls Attacking the Festival!

Hungry Trolls are attacking to steal the food from the Midsummer feast. Stop them!

Based on your performance you placed in the *Bronze/Copper/Silver/Gold* bracket and earned the following reward: