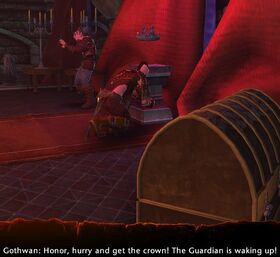 Honor as first seen while stealing Neverwinter's Crown with Gothwan 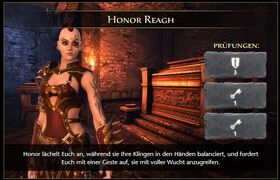 Honor as an opponent in the Gateway

Honor is a thief and a member of the Nasher Rebels. She is first seen during The Theft of the Crown when she steals the crown while the player fights the Guardian of the Nine. She escapes just in time. Sergeant Knox orders the adventurers to find her inside the city Ruined Tunnels near the Driftwood Tavern, where she is defeated. On her body the adventurers can find the Gothwan Note

That adventurer saw us in the vault. We can't stay in the Enclave. I'm going to sell off my share, then I'm heading to Blacklake. We should be safe with Karzov and his Nashers.

This leads to the first Blacklake District quest, which is The Trail of the Crown