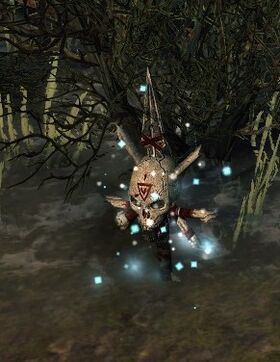 Image of Dyrl Godsword
The spirits move through me, pious one. They show me a terrible beast whose rage cannot be contained. They show me a fire that burns across the ruins of the city of Neverwinter.

... These visions take a lot out of me. God of rage? That's Gruumsh, the father of orcs and lord of storms. Many-Arrows orcs are invading the Tower District. Perhaps among them is the fire that burns the city?

Bring me three Gruumsh idols. I'll confirm it's a Gruumsh worshipper the gods are mad about, and we'll decide what to do next. What do you say?

Image of Dyrl Godsword
Well done. I will now commune with the gods and divine their intentions…

Once you've collected the idols, go back to Dyrl's image and speak to him.

If you've put off the quest until after level 60 (possibly earlier - haven't tested the exact cut-off point), you'll have to wait for a lower level Cleric to show up and make him spawn.