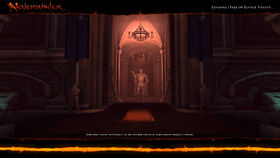 When Lord Neverember decided to make the former temple of Tyr the seat of his rule, he used the vaults as a safe place to store many of the historical treasures uncovered in the city's reconstruction.

The vaults are rumored to be haunted, and popular myth says that the city's honored dead will rise to slay any who disturb their rest.

Hall of Justice Vaults is a Quest Instance located beneath Hall of Justice in Protector's Enclave. You visit this area during the The Theft of the Crown quest.