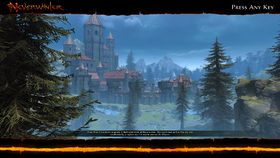 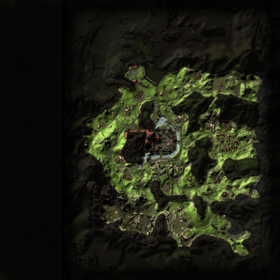 The Stronghold is an adventure zone introduced in Module 7: Strongholds. Every guild has their own unique Stronghold instance that only members of that guild can enter. Characters of any level can enter, but characters below level 70 are raised to level 70.

Each guild's stronghold starts with a level 1 Guild Hall, but other structures can be built and upgraded over time by doing quests and donating to the Stronghold's Coffer.

You won't find a better Stronghold in all of Faerûn. This Stronghold seems like it was built to stand the test of time. It's now our task to do the same to the surrounding land... while making a hefty profit, of course.

Keep an eye out for various problems in the area. The Many-Arrow Orc tribe had several camps out in the area at one point, and my people are reporting other oddities in the area.

If you see something, deal with it, that's why you're called an adventurer after all.

The Stronghold Coffer holds all the resources guild members have donated. Every Stronghold structure built or upgraded uses resources in the Coffer. Upgrading the Guild Hall, or building and upgrading a Warehouse, increases the maximum capacity of the Coffer.

Guild Hall
Every Stronghold starts with a rank 1 Guild Hall. Upgrading the Guild Hall increases the Coffer capacity, unlocks more plots to build on, and increases the maximum rank to which other structures can be upgraded.

Great Hall
The Great Hall is the building at the heart of your Stronghold. Inside is a large meeting area with 4 tables and 40 sittable chairs. You can donate Decorations to The Decorator and place them at over 90 locations in the Great Hall. The Great Hall is available at Guild Hall Rank 1 and does not need to be built.

Marketplace
The marketplace is located inside the Stronghold Keep, and consists of 4 NPC stores:

The marketplace is available after the Stronghold Guild Hall is upgraded to Level 2 and as the Marketplace structures are upgraded, more and better goods can be purchased.

(i.e.: armor and equipment cannot be purchased from the Outfitter until the Marketplace is upgraded to at least Level 2)

Farm
A Farm produces Food over time. An Animal Pen can increase the rate of production.

Lumberyard
A Lumberyard produces Wood over time. A Milling Yard can increase the rate of production.

Mine
A Mine produces Metal over time. A Smelter's Yard can increase the rate of production.

Quarry
A Quarry produces Stone over time. A Masonry Guild can increase the rate of production.

Warehouse
A Warehouse does not produce any resources, but increases the maximum capacity of the Stronghold's Coffer instead.

Animal Pen
An Animal Pen increases the production of Food, and maximum storage capacity of a Farm.

Masonry Guild
A Masonry Guild increases the production of Stone, and maximum storage capacity of a Quarry.

Milling Yard
A Milling Yard increases the production of Wood, and maximum storage capacity of a Lumberyard.

Archer Tower
The Archer Tower will attack nearby enemies in a Stronghold Siege, damaging and slowing them.

A special vendor can be built at the North Terrace Vendor plot.

Temporary structures only last a set amount of time before disappearing.

Recruiter
A Recruiter is a Production Structure that generates 100 [Influence] per hour. The Recruiter lasts 1 week.

Bloomery
A Bloomery is a store that sells Profession and Masterwork Profession Resources. The Bloomery lasts 1 week.

Goldsmith
A Goldmsith is a store that sells Profession and Masterwork Profession Resources. The Goldsmith lasts 1 week.

Assayer
An Assayer is a Production Structure that generates 3 [Gold] resources every 5 hour. The Assayer lasts 1 week.

Atelier
An Atelier is a store that sells Profession and Masterwork Profession Resources. The Atelier lasts 1 week.

Gemcutter
A Gemcutter is a Production Structure that generates 144 [Gems] per hour. The Gemcutter lasts 1 week.

Tannery
A Tannery is a store that sells Profession and Masterwork Profession Resources. The Tannery lasts 1 week.

Jubilee Trader
During the Protector's Jubilee event a Jubilee Trader can be built where a traveling trader will produce Stronghold resources. The Jubilee Trader lasts 24 hours. There are nine possible traders:

Stronghold Boons are separated into 4 categories: Offense, Defense, Utility, and PvP, and you may only have one boon from each category active a time.

To be able to activate Stronghold boons, Boon Structures must be built. Higher ranks of the corresponding structures give larger benefits from the boons. Any member of the Stronghold's guild may activate any boon that has been unlocked.

Master of Coin, The Builder, and The Cleric offer 1 or 2 daily quests each day on a rotating basis. The Ranger offers a daily quest (Defending the Stronghold), and an hourly quest (Stronghold: Keeping the Peace). These quests reward various Shard of Power for donating to the Coffer.

Each Boon Structure has an NPC that gives a level 70 daily quest that rewards Influence. The quest given depends on the rank of the Boon Structure, with higher ranks giving a higher tier quest worth more Influence.

At Guild Hall rank 1 the primary enemy in the Stronghold consists of Orcs of the Many-Arrows tribe. Upon upgrading the Guild Hall to rank 5 the Orcs are replaced by Foreign Mercenaries, at Guild Hall rank 9 the enemies are Barbarians of the Uthgardt Tribe, at Rank 13 the enemies are the Undead Horde, and Thayans at Rank 17. At any Guild Hall rank there are Beasts in Maiden's Lane and Ancient Lake, Devils in Devil's Hideaway, Drakes in Drake Hills, and Spiders in Fae Canopy and Misty Hills.