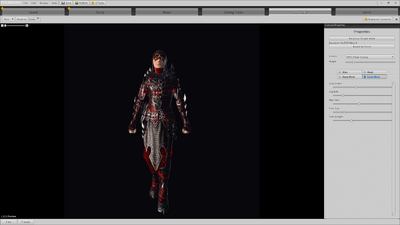 The Foundry Costume Editor allows the user to change the costumes not only of NPCs, but of their boss mobs as well.

In order to use the Foundry Costume Editor to create an NPC, one must open up the Foundry and click the Costume tab. There one can select to sort by races or genders. The basic editor allows for the changing of basic costume, clothes, hair and eyes. If one clicks the advanced editor option, they will find themselves in a menu not unlike the character creation menu when you create a character to play. You can then edit your NPC's build to your liking!

Use caution, however, because the more you edit the build of your NPC, the more you may risk running into graphical errors with the way their clothes hang on them, and even how their hair fits upon them.

Editing for a mob that you wish to be a boss takes a little more work. The mob must first be selected as a quest goal (such as kill monster), before it is eligible for editing beyond just changing it's type. Once it's been put within the story, it becomes an 'actor' instead of just a mob, and this allows you to click on it, and elect customize near the first third of options you get when you open up that mob's specific box. From there, the editing is much the same as for the NPC above! Just simply follow the rules there, and you're on your way!