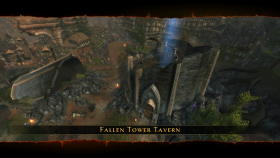 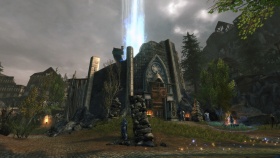 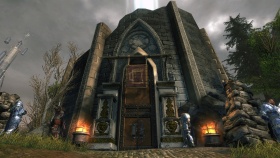 Fallen Tower Tavern - Outside (close up) 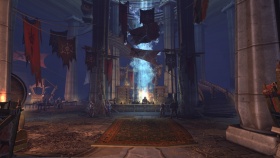 Fallen Tower Tavern - Inside
Fallen Tower Tavern
The broken base of an old wizard's tower has long been the site of a popular tavern in Neverwinter. Within the Fallen Tower, phantom wizards form in the air, seeming solid and real as they replay the moments of their deaths during the Spellplague. They fall into and through the cookfire in the middle of the tavern. Since before the cataclysm, the show has attracted customers to the Fallen Tower.

When the Many-Arrows orcs discovered this vacant building, they found stores of wine and were in the midst of a celebration when the phantoms appeared. The orcs started to flee, but when it became clear that the spirits were harmless, the wine lured them back. Now the Many-Arrows orcs run the tavern as a place where members of their force and others worthy enough to join them can share a few drinks.

The Lord Protector and the leader of the Many-Arrows orcs have declared the Fallen Tower neutral ground, and the orcs do not bother anyone who comes to the tavern to do business.

Fallen Tower Tavern is a point of interest located in Tower District.

Starts in this area

Starts and ends in this area