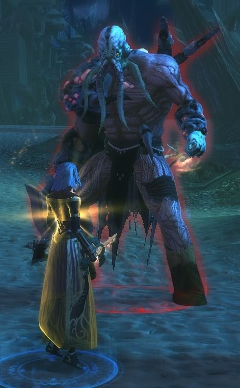 Kill a Thoon Hulk in the Upper Vault.

Hollie Tinkerstone
Brrr! Those mind flayers give me a serious case of the creeps. They're like someone walking around with an octopus on their head - an octopus that wants to eat your brain! And the regular kind are nothing compared to the extra awful sort they call Thoon Hulks. Those creatures make the regular mind flayers seem darn right cuddly!

Aside from being hard on the eyes, I'm pretty sure I don't want to face a Thoon Hulk in a fight either. You're the hired muscle here, why don't get rid of some of a Thoon Hulk for us?

Ya know, I think the best part of being an Underdark Guide is leading adventurers to monsters and letting them kill the awful things while I watch from a safe distance.

There is no walkthrough for this quest yet. You can help Neverwinter Wiki by writing one.
Retrieved from "https://neverwinter.gamepedia.com/Extra_Awful?oldid=104533"
Categories: