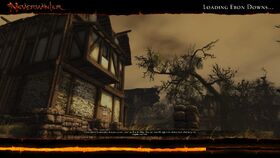 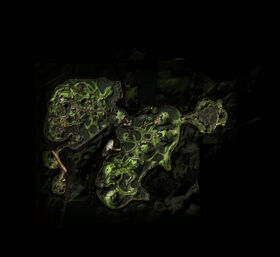 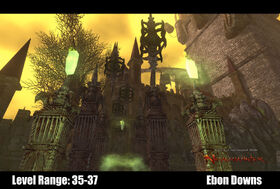 Deep in in the Silverwisp Swamp off the southern High Road lies the burial grounds known as Ebon Downs. Here, many generations have been laid to rest in the barrows, crypts and tombs and watched over by the loyal villagers of Grimhollow. Then one night, the dead rose from their graves in Ebon Downs and overwhelmed the village, leaving few survivors and adding more to their ranks.

When news of a growing undead menace reached Protector's Enclave, Lord Neverember dispatched a contingent of the Neverwinter Guard to counter the threat. Led by Doomguide Vesper Soulhearth under the banner of Kelemvor, god of the dead, these brave soldiers fought the risen forces in a desperate fight to lay their souls to rest. But the battle was doomed to failure. Unbeknownst to Lord Neverember, a powerful Netherese necromancer known as Idris had taken up residence in the barrow's royal rise. Armed with a powerful artifact known as the Deathknell, Idris made pacts with the Barrow Lords of Ebon Downs, building an army of undead to strike at their Thayan enemies. When Lord Neverember's forces arrived, they were ill-prepared to confront these foes. Facing off against Idris' undead army, the Neverwinter Guard fought bravely but were defeated by the Barrow Lords and their animated bone monstrosities.

Only Doomguide Soulhearth survived the encounter, falling back to the nearby Temple of Kelemvor. Soulhearth now works unceasingly to keep the temple grounds sanctified, holding back the hordes of undead threatening to overwhelm the area. Lord Neverember has placed a call to adventurers to travel to the Grimhollow to find Doomguide Soulhearth and the missing Neverwinter Guard. Perhaps then they could lay to rest the evil that has brought the dead to life in Ebon Downs.