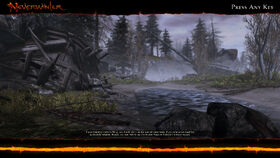 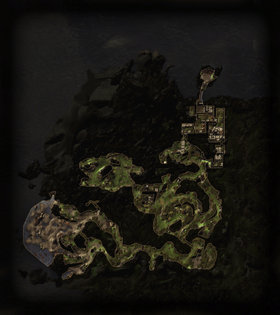 The Drowned Shore is a level 61 to 63 adventure zone introduced in Module 6: Elemental Evil. It is based on the Blackdagger Ruins zone and has been invaded by the Cult of the Crushing Wave. Drowned Shore is divided into three areas: Mines Area, Blackdagger Keep, and Raven Cliff Beach. In order to progress through the zone you must complete quests as part of the Elemental Evil Campaign. There are also many Heroic Encounters in Drowned Shore.

Characters above level 64 are scaled down to 64 while in the zone.

Drowned Shore
In the wake of the defeat of the Blackdagger Bandits trade along the High Road gradually resumed. Rangers of the Emerald Enclave took it upon themselves to guide merchants and travelers through the stretch of coastal forest that surrounds the Blackdagger Ruins, while a group of resourceful dwarves arrived to take up working the abandoned mines around the keep.

Meanwhile, Lord Neverember assigned a small contingent of Neverwinter Guards to garrison the lighthouses at Raven Cliff Beach with orders to prevent those beacons from falling in to the hands of pirates and wreckers as happened once before. The Guards were somewhat surprised to find an ornate tower built on the shore. They learned this tower was built by the followers of Lliira who called it the Fountain of Delights. Visitors were offered relaxing, scented baths. Seeing no harm in this, the guards went about their business.

When a freak tidal wave suddenly struck the shore wiping out the lighthouses and their guards while leaving the Fountain of Delights unscathed, it became apparent that the occupants of the tower were not harmless followers of the goddess of joy, but rather something altogether more sinister.