From Neverwinter Wiki
Jump to: navigation, search
The Dead Rats
The Dead Rats are a ruthless gang of wererats who have burrowed into Neverwinter's filthy underbelly, running their criminal organization out of the sewers near Blacklake. The gang recruits from among the region's scum, infecting new members with lycanthropy to ensure their loyalty.

The Dead Rats claim that they were once part of the infamous Dead Rats thieves' guild of Luskan, but left after a falling out caused a divide within the gang. The claim has yet to be either substantiated or disproven, but it would explain the gang's sudden appearance and their immediate success in their various criminal ventures.

The Dead Rats live in the district sewer. During the game storyline they break their agreement with the Nashers by kidnapping the Nashers' agent Gothwan. Among their ranks are simple infantry warriors, Brutes, enchanters and powerful warriors. They are met only in the homonymous quest, except for a Brute rat called Sewer Guard who can be met in the Tatters and rare patrols in the far west end of the district. 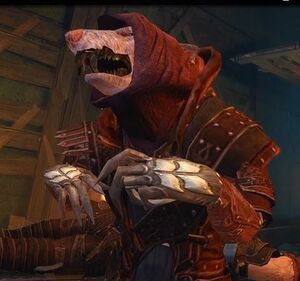