Cult of the Dragon

The Cult of the Dragon is the major enemy faction of players in the Tyranny of Dragons Campaign. This organization was founded by Sammaster, but is now led by Severin. Throughout the campaign, the cult plans and eventually achieves to summon the dragon goddess Tiamat. In Neverwinter (game), the cult is first encountered in the quest Enter the Dragons, though it is mentioned earlier in the tutorial by Makos.

Cult of the Dragon
The Cult of the Dragon is an organization that venerates undead dragons and to a lesser extent, living ones. They were founded by the wizard Sammaster to bring about his mad vision of a world ruled by his ultimate creations, the dracoliches.

With Sammaster destroyed, the knowledge and rituals required to animate dracoliches is kept alive by his faithful cult. Even today they travel the north, promising power and eternal unlife to the evil dragons they encounter.

Cult Schism
Excerpt from book found in the Cult Prison in the Well of Dragons.

Originally, the Cult of the Dragon envisioned a new world ruled over by dracoliches which the cultist would create through their dracolich creation ritual. Now that doctrine has been overturned by Severin, who believes the old prophecies were misinterpreted. Severin believes a new dragon empire would come about ruled by living dragons and their cultist servants.

The effectiveness of Severin's vision, aided by Tiamat's dragon masks, has caused many to flock to the new doctrine. However, there are some who still cling to Sammaster's ways and fight against the new upstarts at every opportunity.
*Source: Quest Sacrificial Victims 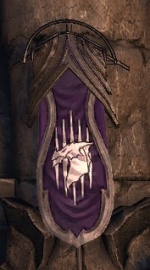