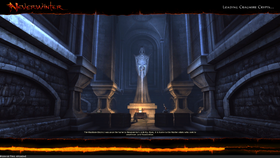 These crypts hold the vast treasures of the Blackdagger house, which are well guarded by their original owners.

Garl Gnarlwclaw at 719, 1105 (campfire site) gives this quest (Blackdagger's End) for the dungeon in completion of the new Deeds campaign system.

Cragmire Crypts
After Cragmire Keep was destroyed by Neverwinter and the necromantic cult shattered, the commanders turned their attention to the extensive crypts beneath the ruins where the cult had conducted most of their dark rituals. Soldiers and priests entered the crypts to purify or destroy the horrors that awaited, but few returned, and those that did spoke of an entire army of undead.

Rather than risk further loss of life, the Neverwinter forces decided to seal the Cragmire Crypts with a powerful enchantment that would ensure that no trace of the cult's work would escape. While the enchantment somehow survived the Spellplague, it was weakened substantially. A wizard named Kallos Tam, working with Traven and Malus Blackdagger, was able to break it and gain entry.

A Dungeon Delve located in the Blackdagger Ruins.

By completing the Epic version of this dungeon, you can obtain once a day a [Cache of the Protector] containing 60