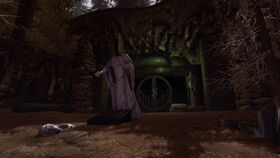 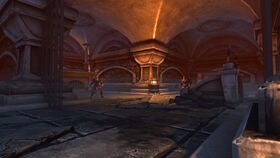 Cragmire Barrow - Inside
Cragmire Barrow
Near Blackdagger Keep lies an ancient barrow. A faded inscription near the barrow reads:

"Here lie the last of the once-noble House of Cragmire, brought low by their own meddling in the dark and necromantic arts, 1328 DR, Year of the Adder."

The Cragmire noble house was once allied with the throne of Neverwinter. In the early 1300s, however, it was discovered that the Cragmires were leading a necromantic cult and raising an undead army to threaten Neverwinter and the Sword Coast. Neverwinter's army attacked Cragmire Keep, reducing much of it to ruins and wiping out the cult, along with the Cragmire line. The crypts below the keep were infested with undead and sealed with a powerful enchantment.

Cragmire Barrow is a point of interest located in Blackdagger Ruins.