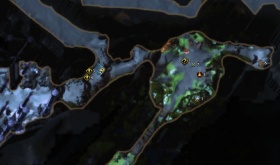 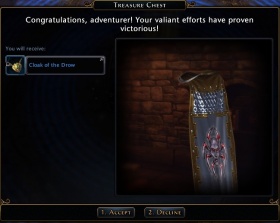 Item Reward: Cloak of the Drow

Free the Dwarf of Delzoun Blood from House Xorlarrin imprisonment in the Whispering Caverns.

Bregan D'aerthe Operative
It took me some time to decipher the coded Xorlarrin orders you brought me in Rothé Valley, but it has paid off. Apparently, House Xorlarrin seeks access to the fabled dwarven city of Gauntlgrym. It must contain contain something of great power that the Xorlarrin desire.

Gauntlgrym is protected by a huge set of mithral doors, which will only open to the touch of a dwarf of Delzoun heritage. Which is what the Xorlarrin captured in Rothé Valley! The captive is being held in Zesraena by a wizard named Gelafein. I will misdirect their attention. You slip in and retrieve the dwarf.

I wonder what it is inside Gauntlgrym the Xorlarrin desire so strongly. Perhaps my superiors will know. As they will know of your contributions to our cause. Thank you for your help once again, <name>.

At the passageway to Zesraena, beside Wendolyn Shoosh, near the Underdark Guide Encampment in the Whispering Caverns. (914, 825)