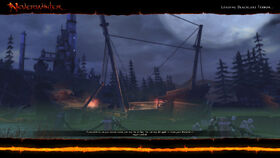 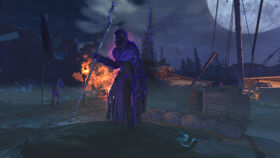 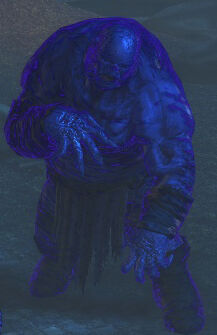 A priest of the lurking god Ghaunadaur is summoning unnatural things from the bowels of Blacklake. Drive back the terror and slay the priest!

Blacklake Terror is a Skirmish set in the Blacklake District, mainly in the Lakeside area.

Journal Entry
"Rally on Alchemist Hazel at the fountain, then use the barrels of alchemist fire to drive back the undead and defeat the Chosen of Ghaunadaur!"

My master Hazel went to try and fight them off, but she could use your help!

Player
How can I help?
Piniwin the Apprentice
Help Hazel fight back the undead creatures! If you destroy enough of them, the Chosen of Ghaunadaur will be angered into attacking you himself!

Hazel also set up barrels of Alchemist Fire on the edge of the lake. Light them up to set the undead aflame. But be careful - the fire spreads quickly and is very dangerous!

Player
Who's Ghaunadaur?
Piniwin the Apprentice
Ghaunadaur is "That Which Lurks". He is an ancient evil god of oozes, slimes, and abominations. If one of his "Chosen" is in Blacklake District, that certainly explains what happened to the place!
Player
Don't worry, miss. We'll take care of this!

If ran during the Skirmish Event, the above plus:

Blacklake Terror consists of three waves of enemies followed by a boss wave.

The first wave consists of groups of rotters.

The second wave consists of groups of rotters and a Hulk (Zombie).

The third wave is similar to the previous wave with the addition of a second Hulk.

The final wave has the Chosen of Ghaunadaur make its way to the beach from the wrecked ship that it has been watching the battle from in order to confront the heroes. This wave also has two zombie Hulks.