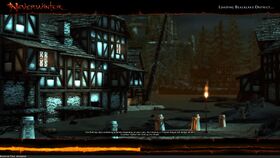 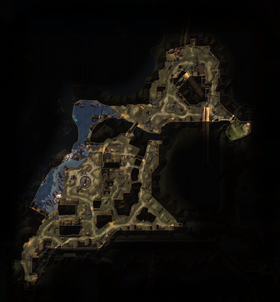 Blacklake District is the first adventure zone met by the players, after the tutorial areas (Neverwinter Fields and Sleeping Dragon Bridge) and Protector's Enclave. It was the old noble quartier of Neverwinter, containing even a Zoo. It is divided in two subzones, the Tatters and Riverside which are connected by a bridge. The area lies in ruin, overrun by the Nashers who fight to retain the territory against the Neverwinter Guard and other minor factions that plot in the shadows of the district.

Blacklake District is also the setting of the first Skirmish, Blacklake Terror!

Blacklake District
Although the Blacklake District stands largely intact in the wake of the various disasters that laid Neverwinter low, those who inhabit the district have violently resisted Lord Neverember's plans to resettle it. The Nashers, the more violent faction of the anti-Neverember Sons of Alagondar, have claimed the area for themselves, daring Neverember's soldiers and mercenaries to try to take it from them by force.

As if the Nashers weren't enough of a problem by themselves, there are rumors that a secret society of devil-worshippers operates in the Blacklake District, where they slowly infiltrate the ranks of both the Nashers and Neverember's troops. Reports of kidnappings are common, and in the southern end of the district one can even find diabolic symbols left as graffiti on the walls of the crumbling buildings.

There is much to be done if the Blacklake District is to be safe for Neverwinter's civilians once more. 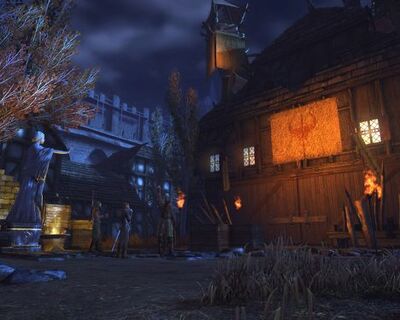 NASHERS FOR LORD NASHER
The Pretender would like it if people forgot their past. But we remember! We call ourselves Nashers in memeory of Lord Nasher Alagondar, the ruler of Neverwinter's golden age. He saw the city through war and tragedy and ruled fairly and wisely. In his memory we fight against the Lord Pretender, Neverember, and his Waterdhavian invaders. Long live Neverwinter! Down with the Pretender!

The Nashers are the most violent group of the anti-Neverember faction "Sons of Alagondar". They are led by Arlon Bladeshaper and his second-in-command, the Uthgard barbarian Karzov, who leads the rebel forces in Blacklake District. They are the strongest faction in Blacklake and that's why they brought Neverwinter's Crown there after they stole it. After a number of investigation quests the heroes are able to retrieve the crown and defeat such important Nashers as Karzov himself. 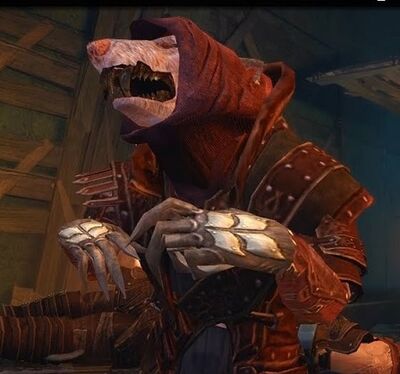 THE DEAD RATS
The Dead Rats are a rutheless gang of wererats who have burrowed into Neverwinter's filthy underbelly, running their criminal organization out of the sewers near Blacklake. The gang recruits from among the region's scum, infecting new members with lycanthropy to ensure their loyalty.

The Dead Rats claim that they were once part of the infamous Dead Rats thieves' guild of Luskan, but left after a falling out caused a divide within the gang. This claim has yet to be either substantiated or disproven, but it would explain the gang's sudden appearance and immediate success in their various criminal ventures.

The Dead Rats live in the district sewer. During the game storyline they break their agreement with the Nashers by kidnapping the Nashers' agent Gothwan. Among their ranks are simple infantry warriors, Brutes, enchanters and powerful warriors. They are met only in the homonymous quest, except for a Brute rat called Sewer Guard who can be met in the Tatters and rare patrols in the far west end of the district. 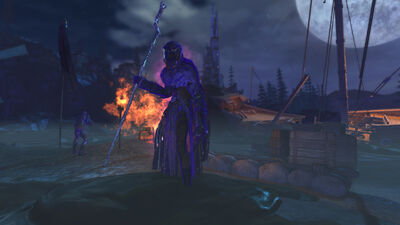 The Chosen of Ghaunadaur
BLACKLAKE SLUDGE
The lake for which the Blacklake District was named still sits in the center of the district. However, it has been utterly polluted by ash and debris from the eruption of Mount Hotenow, as well as by filth and rubbish from the vagabonds and vagrants who make their homes in nearby ruined houses. The lake looks more like a midden pit of thick, black sludge these days than a body of water.

Hazel the Alchemist, working nearby the lake, has been studying the sludge. Although her findings were inconclusive, she suspected that the sludge had somehow become composed of something else beyond what she had expected. It had strange, almost magical properties, although where such properties could have come from is a mystery.

The sludge covering Blacklake all around is the main study topic of Hazel the Alchemist. During the storyline she asks the character to retrieve some sludge and the alchemic supplies stolen by the Nashers. However, even if their studies clearly show the magical proprieties of the sludge, the truth only comes out during the skirmish Blacklake Terror!, when a group of Zombies and undead Hulks storms the district led by a Ghaunadaur cleric, who is thought to be the origin of the sludge magic.

GHAUNADAUR
Ghaunadaur, also known as The Elder Eye and That Which Lurks, is a greater deity and the god of abominations. This monstrous deity demands that his followers' prayers to him come coupled with the sacrifice of a living being, particularly delighting in creatures that offer themselves without resistance. To curry his favor, many of his priests use mind-affecting magics on potential sacrifices in order to ensure such a level of compliance.

There are secret, subterranean altars and cults to The Elder Eye all over Toril, but to have such a powerful worshipper in the middle of Neverwinter, even in its ruined state, is strange. It appears that the Ghaunadaur priest was not attracted by the Blacklake sludge, but that the sludge was transformed by Ghaunadaur's power. It's unclear if the priest was working alone, or if he is part of something larger.

Because of this system, the Neverwinter Guard investigators have had an extremely difficult time learning any information from the few Ashmadai cultists they manage to identify and capture. Whoever is at the top of the chain of command is in little danger of being discovered any time soon.

Investigator Rannigan came to the conclusion that the Nashers have been infiltrated by Ashmadai. A tiefling hero can be asked to look for Ashmadai Marks used by the concealed cultists to recognize themselves. This is the only way to get the following Lore.

DIABOLIC PACTS
Many mortals wish for power. Some work for it, some steal it, some study to learn it, and some take it by force. Some, however, are willing to buy it from the denizens of the Nine Hells. Such a transaction typically comes at a high price if the mortal wishes to be granted great power, but many devils delight in bargaining and will gladly haggle what they can out of mortals for a lesser boon as well.

There are no rules when it comes to bargaining with devils, except those that are agreed upon. Any who wish to take such a risk would do well to remember that devils are irredeemably evil creatures that consume mortal souls to fuel their grand infernal designs. No matter what the devil may say or do, no matter how much it claims to value fairness and openness in its dealings, its ultimate goal will be to take from you your mortal soul.